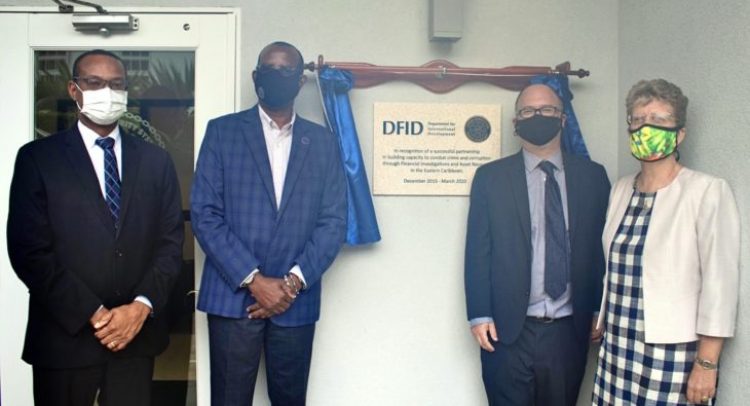 The UK and the RSS Asset Recovery Unit (RSS ARU) highlighted their long-term partnership with the unveiling of a plaque at the RSS Fusion Centre today in Barbados.

The RSS ARU was borne out of a joint commitment between the UK and the RSS to help ‘take the profits out of crime’ by preventing criminals from keeping the illicit gains
of their unlawful activities through money laundering and confiscation legislation.

Through the years, the RSS ARU has worked to build capacity and capability within regional law enforcement agencies and Financial Intelligence Units (FIUs).

The ARU has provided mentoring on live cases; facilitated training for law enforcement and criminal justice practitioners in financial investigations and asset recovery; raised awareness of the magistracy and judiciary; regularly engaged with and provided advice to stakeholders and advocated for and aided in the implementation of standardised and updated Proceeds of Crime legislation across the seven RSS Member States.

On March 31, 2020, the RSS ARU transitioned from a UK-funded project to an integrated department of the RSS – which is now fully responsible for all elements of the RSS ARU including staffing, budgetary allocations and administration.

Speaking to members of the media about the successful UK-Caribbean development partnership, British High Commissioner to Barbados and the Eastern Caribbean, Her Excellency Janet Douglas commended Executive Director of the Regional Security System (RSS) Captain Errington Shurland, who was present at the ceremony, for his governance and stewardship over the ARU since its formation in December 2015.

“I must also commend his team for their hard work and personal commitment to the growth and sustainability of the ARU.

The simple fact that the RSS Member States took on responsibility for the ARU, demonstrates its perceived value and importance to the region. We are proud of the contribution that the form

“er UK Department for International Development (DFID) made towards this vital work on asset recovery across the Eastern Caribbean. We look forward to the continuation of a close partnership between the RSS and the UK under the new Foreign, Commonwealth and Development Office (FCDO),” the High Commissioner said.

To date, the RSS ARU mentoring has assisted in the identification and restraint of US $26.8 million of criminal assets.

In addition, US $7.5 million has been (civil) forfeited by the courts using cash seizure provisions, with a further US $4.5 million seized and in the court process. Up to 120 money-laundering investigations are also being carried out, with 85 persons charged with money laundering offences.