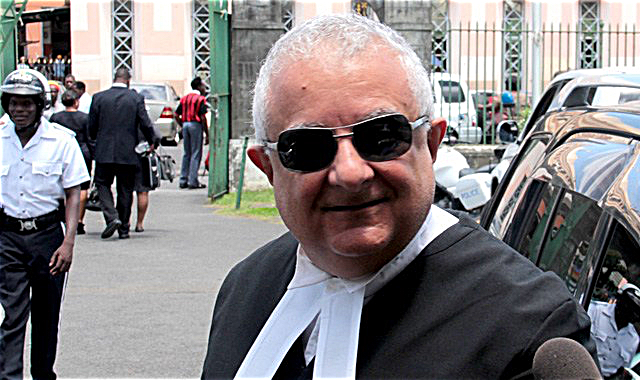 Basseterre, St. Kitts, 3rd July, 2018 (MyVueNews.com) – The Attorney General of the Team Unity Government is now required to obtain a lawyer from Dominica to give expert evidence on the laws of Dominica concerning the issuance of diplomatic passports and whether or not an applicant must swear allegiance to the issuing country.

This ruling is in reference to the case where the Government of St. Kitts and Nevis claims that Opposition Leader Dr. Denzil L. Douglas had sworn allegiance to a foreign country in an application for a diplomatic passport from the Commonwealth of Dominica, a claim which Dr. Douglas has denied repeatedly.

In a recent hearing at the High Court in Basseterre, the Attorney General’s legal team had argued that because Dominica and St. Kitts-Nevis were in the same judicial system, there was no need to obtain an expert on the laws of Dominica, and that the local High Court can make the necessary interpretations of the laws of Dominica.

But the Counsel for Dr. Douglas had strongly objected to that view and requested that an expert in the passport laws of Dominica be brought to St. Kitts.

On 2nd July, Judge Ward issued his ruling in favour of the defence, Dr. Douglas, and his legal team.

“We argued that Dominican law is a matter of fact, so it would require an expert from Dominica to be sworn into evidence and to give evidence to the Court on what are the specific laws of Dominica which are applicable,” said Angelina Sookoo–Bobb, a member of Dr. Douglas’ legal team.

Sookoo–Bobb continued, “The Attorney General argued that while usually, foreign law requires an expert to assist the court, in this particular circumstance, because it involves two countries which are members of the Eastern Caribbean Supreme Court system, it amounts to an exception and, therefore, on the basis of a common court, the High Court sitting in St Kitts can determine Dominican law and its jurisdiction extends to Dominica and therefore, we do not need a witness from Dominica to assist the court in terms of what are the laws of Dominica, but the court can take what is called ‘judicial notice’ of what those laws are.”

Meanwhile, Senior Counsel for the defendant Anthony Astaphan considered the ruling to be of extreme importance.

He said, “The Attorney General will have to get a lawyer from Dominica to give expert evidence under the circumstances under which the Diplomatic Passport was acquired, or whether there was any law in the Commonwealth of Dominica that make such an application in the use of such a passport a disqualifying factor.”

Astaphan continued, “No doubt the Attorney General will rely on the cases from Jamaica and others that spoke about passports, but those are about regular passports after the acquisition of citizenship.”

Astaphan concluded, “In our view, we think this is a significant step forward for us in relation to the prosecution of the case, and we look forward to the next set of applications we may have to deal with and then the trial of the matter.”

The case goes to trial at the Sir Lee Llewellyn Moore Judicial and Legal Services Complex on 28th September, 2018.

No room yet for trade of recreational marijuana