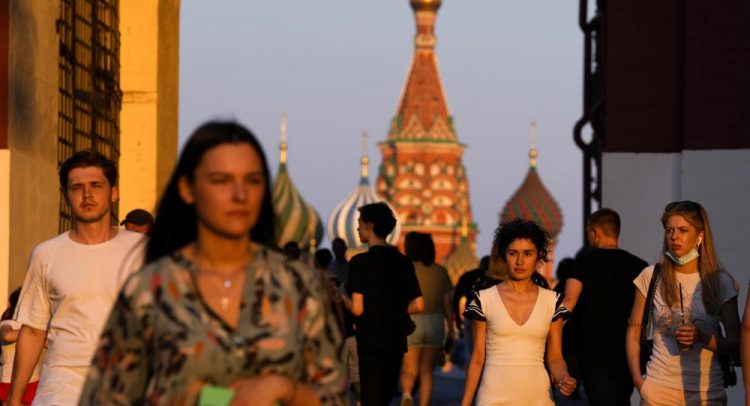 Russia mandates vaccinations for some as virus cases surge

MOSCOW (AP) — They tried grocery giveaways and lotteries for new cars and apartments. But an ambitious plan of vaccinating 30 million Russians by mid-June still has fallen short by a third.

So now, many regional governments across the vast country are obligating some workers to get vaccinated and requiring the shots to enter certain businesses, like restaurants.

As many Western countries lift coronavirus restrictions and plan a return to normal life after mass vaccinations, Russia is battling a surge of infections — even though it was the first in the world to authorize a vaccine and among the first to start administering it in December.

Officials have blamed Russians’ lax attitude toward taking necessary precautions and the growing prevalence of more infectious variants. But perhaps the biggest factor is the lack of vaccinations.

Over 21 million people, or about 14% of the population of 146 million, have received at least one shot as of Friday. According to figures from earlier this week, only 16.7 million, or about 11%, have been fully vaccinated.

Health Minister Mikhail Murashko said only 0.5% of those who had gotten both doses have contracted COVID-19.

Experts say those numbers are due to several factors, including the public’s wariness of the rushed approval and rollout of the Sputnik V vaccine; an official narrative that Russia had tamed its outbreak; criticism on state TV of other vaccines as dangerous; and a weak promotional campaign that included incentives such as consumer giveaways.

In light of the surge, 18 Russian regions — from Moscow and St. Petersburg to the remote far-eastern region of Sakhalin — made vaccinations mandatory this month for employees in certain sectors, such as government offices, retail, health care, education, restaurants and other service industries.

Moscow authorities said companies should suspend without pay employees unwilling to get vaccinated, and they threatened to temporarily halt operations of businesses that don’t meet the goal of having 60% of staff get at least one shot by July 15 and both shots by Aug. 15.

As of Monday, all Moscow restaurants, cafes and bars will admit only customers who have been vaccinated, have recovered from COVID-19 in the past six months, or can provide a negative coronavirus test from the previous 72 hours. City officials also limited most elective hospital care to those who are fully vaccinated or can provide tests showing they have antibodies to fight the infection.

The moves seem to be an act of desperation by authorities.

“They backed themselves into a corner, they have no choice now,” said Judy Twigg, a political science professor specializing in global health at Virginia Commonwealth University.

“They overhyped this vaccine so that people didn’t trust it. Then they took a series of measures that were clearly attempted to make it seem as though the government had everything under control, the pandemic was no big deal. … And now they’re in this situation, not surprisingly, where low vaccination rates have left an opening for the delta variant to come in,” she said.

Kremlin spokesman Dmitry Peskov insisted Friday there were no mandatory vaccinations and “no one is making” Russians get shots. Earlier this week, Peskov explained that those required to get vaccinated because of their line of work can refuse it and seek a different job.

The governor of the southern region of Krasnodar, home to the Black Sea resort of Sochi, said hotels and sanitariums will only accommodate vacationers with a negative coronavirus test or a vaccination certificate starting July 1. As of Aug. 1, only vaccinated individuals will be admitted.

Russia’s Association of Tour Operators has since reported “a flood of requests” to cancel bookings in the usually popular destination.

The mandates have drawn mixed responses, with some saying they are welcome if they prevent closures of businesses, while other say it’s unclear how employers can persuade those who don’t want the shots.

“Most restaurateurs believe that vaccination is necessary,” said Sergei Mironov, founder of a restaurant chain and vice president of the Federation of Restaurateurs and Hoteliers. “But it is necessary to create (the right) conditions for the vaccination (drive).”

“There are too many rumors, and even doctors say different things,” and convincing younger employees to get vaccinated is especially difficult, he said.

Tatyana Moskalkova, the government’s human rights commissioner, said the unvaccinated have cited discrimination by employers, with threats of dismissal or withholding bonuses.

At a TV awards ceremony Tuesday, popular actor Yegor Beroyev wore a yellow star akin to those worn by Jews under the Nazis in World War II, and he spoke of “waking up in a world where (COVID-19 vaccination) became an identification mark of whether you are a citizen, … will you be able to visit institutions and events, will you enjoy all the benefits and rights.”

As proof of vaccination for entering a restaurant, customers must visit a government website and get a QR code, a digital pattern designed to be read by a scanner.

Restaurant owners won concessions Thursday when Moscow agreed the QR codes aren’t needed for the next two weeks at establishments with outdoor terraces, and underage customers won’t have to provide documentation if accompanied by their parents.

Still, the situation for many restaurants “is hard and will be harder by the day,” Mironov said.

The number of such offers has grown about 19% every month since March, said Evgeny Egorov, digital risk protection analyst at Group-IB, a Singapore-based cybersecurity company. In mid-June, Group-IB found at least 90 active offers, he said.

The independent pollster Levada Center said polls show about 60% of Russians are unwilling to get vaccinated.

Levada director and sociologist Denis Volkov said the vaccination mandates could change the minds of many because it’s a clear signal from the government that the shots are necessary.

“I often hear (from respondents) that they wouldn’t do it, are afraid and so on, but if there are restrictions, and it is required for travel, state services, or at work, then yes,” Volkov said.

It could be starting to change attitudes. Deputy Prime Minister Tatyana Golikova said the average vaccination rate across Russia has almost doubled in the past week, and long lines have been seen at pop-up vaccination clinics in Moscow shopping malls.

Murashko, the health minister, said Sputnik V, Russia’s most widely used vaccine out of four domestically developed shots, has been cleared for pregnant women, a group previously ineligible for vaccination. He cited “positive” study results but didn’t provide the data.

A demand for vaccines could also lead to shortages. As of mid-May, just over 33 million doses were produced in Russia, and a significant amount was exported.

Several regions have reported supply problems this week, but Peskov assured those were “temporary logistical difficulties.”

People, most of them without face masks, walk at Red Square during sunset in Moscow, Russia, Thursday, June 24, 2021. An ambitious plan of vaccinating 30 million Russians by mid-June against the coronavirus has fallen short by a third, and the country has started to see a surge in daily new infections. (AP Photo/Alexander Zemlianichenko)