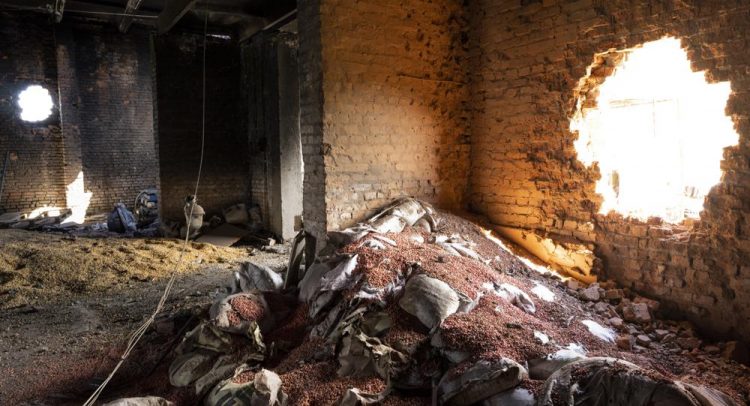 By AYSE WIETING and SUZAN FRASER

ANKARA, Turkey (AP) — Russia and Turkey voiced support Wednesday for a safe corridor in the Black Sea to allow Ukrainian grain exports, but Kyiv rejected the proposal, saying it was not credible. The European Union accused Moscow of “weaponizing” food supplies to gain an advantage in the war.

Russia also demanded that Ukraine remove mines from the Black Sea and both Moscow and Ankara said the West should ease sanctions on Moscow to allow the export of Russian grains amid an escalating world food crisis. While food exports are technically exempt from the sanctions, Russia claims that restrictions on its ships and banks make it impossible to deliver its grain to global markets.

Ukraine is one of the world’s largest exporters of wheat, corn and sunflower oil, but Russia’s invasion and a blockade of its ports have halted much of that flow, endangering food supplies to many developing countries, especially in Africa. Many of those ports are now also heavily mined.

Turkish Foreign Minister Mevlut Cavusoglu hosted his Russian counterpart Sergey Lavrov in Ankara on Wednesday for discussions focused on a United Nations proposal to free Odesa and Ukraine’s other Black Sea ports and allow 22 million tons of grain sitting in silos to be shipped out. Ukraine was not invited to the talks.

U.N. Secretary-General Antonio Guterres has been working on a package for weeks that would allow Ukraine to export wheat and other commodities from Odesa and enable Russia to export grain and fertilizer to global markets.

But Russia and Turkey appear eager to dictate the terms and cement further control over the Black Sea. Turkey has maintained its close ties to both Ukraine and Russia. It has criticized Russia’s invasion of Ukraine, but hasn’t joined the international sanctions against Russia.

Russia has urged Ukraine to remove mines from the area near Odesa to allow safe grain exports, and Russian President Vladimir Putin pledged that Moscow wouldn’t use the corridors to launch an attack. Both Ukrainian and EU officials cast doubt on the pledge; it was Putin who also insisted earlier this year that he had no plans to invade Ukraine.

But Lavrov said Wednesday that Russia is ready to formalize the guarantee for Odesa. The Russian envoy promised that Moscow would not “abuse” its naval advantage if the mines were removed from Ukraine’s ports and would “take all necessary steps to ensure that the ships can leave there freely.”

Turkey says it would facilitate and protect the transport of the grain in the Black Sea. The Greek government has also offered the country’s powerful shipping fleet for the task, but Ankara has not made any mention about Athens being part of the possible deal. The Turkish government has recently ramped up rhetoric against neighbors including Greece and Cyprus over historical disputes.

Turkey has other vested interests in helping to secure a deal: Ankara needs Moscow’s approval to continue its presence in northern Syria, where it plans to launch a new cross-border offensive against Syrian Kurdish militia that Ankara views as a security threat.

“Turkey really needs Russia’s blessing in order to be able to carry on this operation,” said Merve Tahiroglu, Turkey program coordinator at Project on Middle East Democracy. “I think they’re really going to try to get that kind of a concession out of the Russian side.”

Turkey also depends heavily on Russian and Ukrainian wheat imports for its own food supplies and is eager to burnish its reputation in Africa, which has been severely affected by the food crisis, said Eleonora Tafuro Ambrosetti, a Milan-based research fellow at the Italian Institute for International Political Studies.

Ankara “has been investing quite a lot in its image in Africa as a benevolent country,” she said.

Russia, meanwhile, “is trying to portray itself as a country willing to compromise, to reach a deal,” Tafuro Ambrosetti added.

Lavrov’s meeting came as Turkey — a NATO member — has voiced strong opposition to Sweden and Finland’s recent bids to join the alliance. Moscow has also objected to the Nordic countries’ candidacy — which analyst say may play a role in discussions concerning Syria.

The head of Ukraine’s grain traders group scoffed at Turkey’s effort to negotiate a deal.

“Turkey doesn’t have enough power in the Black Sea to guarantee security of cargo and Ukrainian ports,” Ukrainian Grain Union chief Serhiy Ivashchenko said Wednesday. He said it would take three to four months to remove sea mines, and also alleged that it was Russia that mined the area.

At a joint news conference with Lavrov, Cavusoglu said Turkey considers the plan to be a “reasonable” and “feasible” one, although he acknowledged that it would require negotiations between Kyiv and Moscow.

The Turkish minister also backed easing Western sanctions against Russia for its invasion of Ukraine.

“Let’s be very clear,” European Commission President Ursula von der Leyen said at the European Parliament in Strasbourg, France. “Our sanctions do not touch basic food commodities. They do not affect the trading of grain or other food between Russia and third countries. And the port embargo specifically has full exemption on agricultural goods. So let’s stick to the truth. It’s Putin’s war of aggression that fuels the food crisis and nothing else.”

At the European Parliament on Wednesday, European Council President Charles Michel accused the Kremlin of “weaponizing food supplies and surrounding their actions with a web of lies, Soviet-style.”

Ukrainian President Volodymyr Zelenskyy and Turkish President Recep Tayyip Erdogan discussed the creation of a safe sea corridor last week, the Ukrainian Foreign Ministry said Tuesday. The ministry also called for security guarantees, such as a supply of weapons to defend against maritime threats and the participation of NATO ships in the Black Sea.

Addressing the possibility of resumed peace talks between Kyiv and Moscow, Cavusoglu said Wednesday that Turkey was “much more optimistic,” and he reiterated Ankara’s offer to oversee a meeting between Ukrainian President Volodymyr Zelenskyy and Putin.

Lavrov said Russia was willing to hold further talks but accused Zelenskyy of “changing his position all the time” over conditions for a leaders’ summit.

FILE – Scattered grain sits inside a warehouse damaged by Russian attacks in Cherkaska Lozova, outskirts of Kharkiv, eastern Ukraine, May 28, 2022. Russia and Turkey voiced support Wednesday, June 8, 2022, for the creation of a safe maritime corridor in the Black Sea so Ukraine can export grain to global markets amid an escalating world food crisis. But Russia demanded that the Black Sea be demined and Turkey said allowing the Ukraine exports should be accompanied by easing Western sanctions against Russia. (AP Photo/Bernat Armangue, File)