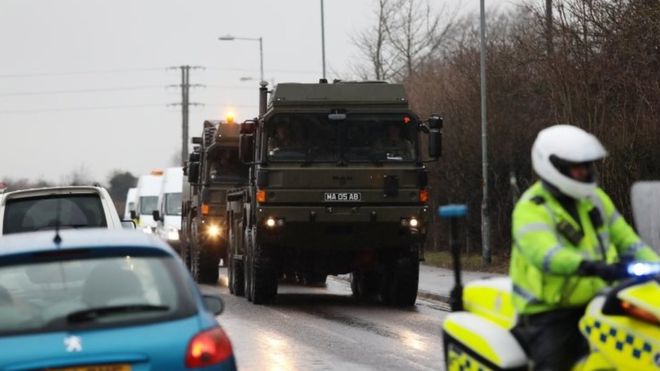 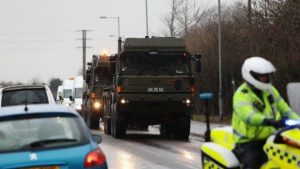 About 180 military personnel have been deployed to Salisbury to help in the investigation into the attempted murder of an ex-Russian spy and his daughter.

The personnel – from the Army, Royal Marines and RAF – are experts in chemical warfare and decontamination.

Sergei Skripal and his daughter Yulia remain in a critical condition after being exposed to a nerve agent.

Home Secretary Amber Rudd will chair a meeting of the government’s emergency committee, Cobra, on Saturday.

She has described Sunday’s attack as “outrageous”.

Those deployed include instructors from the Defence Chemical Biological Radiological and Nuclear Centre and the 29 Explosive Ordnance Group, who are experts in bomb disposal.

Eighteen vehicles have also been sent.

Members of the military were seen covering over a police car that has been at Salisbury Hospital since Sunday, before men dressed in white hazardous materials suits examined it.

It was later towed away from the hospital, covered by a tarpaulin, on the back of an Army truck.

Specialist officers have also put up a tent over the grave of Mr Skripal’s son, who died last year, at Salisbury cemetery.

The Metropolitan Police said the counter-terrorism unit has requested the military’s assistance “to remove a number of vehicles and objects from the scene”, including ambulances that may have been contaminated while assisting the victims.

The public should not be alarmed and there is no evidence to suggest a wide public health risk at this time, the police added.

The former Russian military security colonel and his daughter remain in a critical condition at Salisbury District Hospital.

Det Sgt Nick Bailey – who attended the scene on Sunday – is conscious but “very anxious” about being exposed to a nerve agent.

Director of nursing Lorna Wilkinson said Mr Bailey was in a serious but stable condition.

Specialist investigators wearing protective suits have been seen examining the bench that Mr Skripal and his daughter collapsed on.

Mr Skripal’s house and his car have also been cordoned off.

It is known that Mr Skripal and his daughter had visited the Mill pub and Zizzi restaurant in Salisbury on Sunday afternoon, before they were found near the Maltings shopping centre.