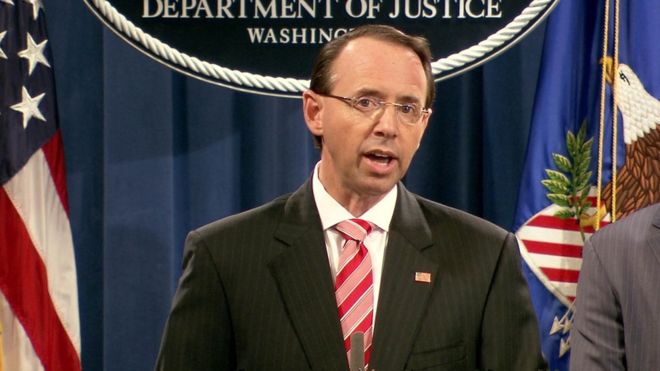 The US justice department has indicted 12 Russian intelligence officers for hacking Democratic officials in the 2016 election.

The investigation has already indicted 20 people and three companies.

What’s in the indictment

The indictment says the named Russian intelligence officers began their cyber-attacks in March 2016 to hack the email accounts of volunteers and employees of Hillary Clinton’s presidential campaign.

Mr Rosenstein said the defendants corresponded with several Americans during the alleged conspiracy, but added there is no allegation that any US citizen committed a crime.

He said they also “conspired to hack into the computers of state boards of elections, secretaries of state, and US companies that supplied software and other technology related to the administration of elections to steal voter data stored on those computers”.

The indictment states the conspirators searched a campaign committee computer specifically for terms including “Hillary”, “Cruz”, “Trump” and “Benghazi Investigations”.

Mr Rosenstein said the conspirators created fictitious online personas, including “DCLeaks” and “Guccifer 2.0”, using these identities to release thousands of stolen emails and other documents from June 2016.

The candidate was not identified.

Mr Rosenstein said: “We know that the goal of the conspirators was to have an impact on the election.

“What impact they may have had, what their motivation may have been independently of what’s required to prove this offence, is a matter of speculation. That’s not our responsibility.”