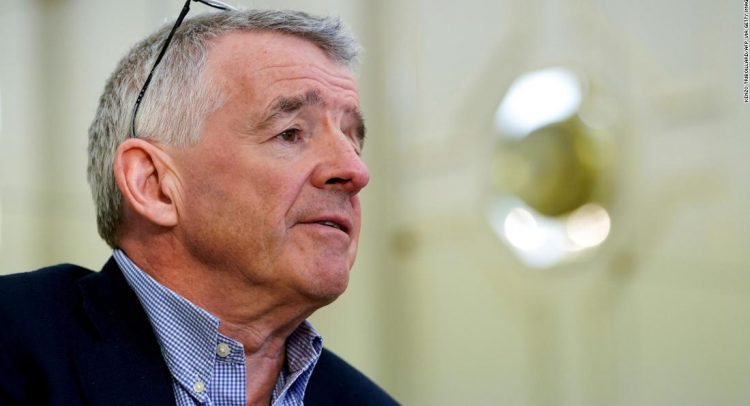 London (CNN Business)The CEO of Europe’s largest airline has slammed the UK government’s handling of the coronavirus pandemic and described plans to impose a 14-day quarantine on international visitors as “idiotic and unimplementable.”

Ryanair’s (RYAAY) Michael O’Leary said Monday that the UK government has “mismanaged the crisis for many weeks,” adding that plans to impose a 14-day quarantine on certain international visitors, while exempting people arriving from Ireland and France, are “laughable.”

“As the government puts more meat on the bones of an unimplementable, unmanageable and unpoliceable 14-day lockdown, people will simply ignore something that is so hopelessly defective … and what we’re trying to encourage the UK government in our direct calls with them is let’s have some effective measures like face masks,” O’Leary told BBC radio.

The UK government’s new requirement that international arrivals not covered by a shortlist of exemptions self-isolate for 14 days could threaten Ryanair’s plans to restore 40% of its flights starting in July. Many travelers will be reluctant to fly if they need to spend time in isolation after landing in the country.

With transmission of the virus now coming under control in the United Kingdom, and other countries beginning to lift lockdowns, new measures need to be put in place at the border, according to the UK government.

These measures will “prevent reinfection from abroad and a second wave of cases that overwhelms the NHS [National Health Service],” a spokesperson for the Home Office said in a statement on Monday.

O’Leary, who thinks the new measures will be dropped before the end of June, said it made no sense to quarantine international travelers, but not people using other forms of public transportation.

“This government is telling us you can’t fly unless you isolate for 14 days, yet you can go on the London Underground, you don’t have to isolate for 14 days. They’re making this stuff up as they go along and none of it has any basis in science,” he added.

Britain has recorded the highest number of coronavirus deaths in Europe, and O’Leary is not the first to attack the UK government’s handling of the crisis. It has been accused of taking too long to enforce social distancing early in the outbreak. Plans to ease lockdown rules drew further criticism last week for being unclear and impractical. For example, Prime Minister Boris Johnson urged workers in some industries to return to their jobs but said they should avoid using public transportation where possible.

O’Leary said there is “considerable consensus” that wearing face masks is effective in eliminating the spread of Covid-19, and that this is the only way to allow people to safely use mass transportation, including commuter trains and planes. “Without those people traveling, you can’t restart this economy,” he added.

The UK government has advised the use of face coverings in enclosed public areas, such as public transportation, but has stopped short of making it compulsory. The World Health Organization has said that masks are effective only when used in combination with frequent hand washing. But several countries, including Germany, France, Italy and South Africa, have made the wearing of masks mandatory in stores and on public transport.

As countries in Europe begin to ease lockdowns, Ryanair is forging ahead with plans to resume flights and has unveiled a raft of new measures that its passengers will need to observe, including wearing masks on board aircraft and in terminals.

The airline, Europe’s largest by passenger numbers, usually operates low-cost flights to more than 200 destinations across the continent and plays a vital role in supporting the tourism industries of countries such as Spain, Portugal, Italy, Greece and France.

Ryanair posted a profit of €1 billion ($1.1 billion) for the year to March 2020, a 13% increase on the previous year. But it flagged a €200 million ($216 million) loss for the April to June quarter, and said it expects to carry just 80 million passengers during the current financial year, almost 50% fewer than previously targeted.

Granger promises to accept ‘whatever’ declaration is made by GECOM