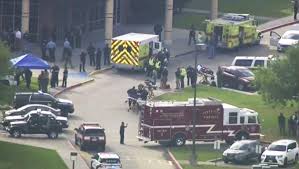 Between eight and 10 people have been killed in a shooting at a Texas high school, say police.

A student is in custody after the attack at the school, which is about 40 miles (65km) south of Houston.

The death toll makes this the deadliest school shooting since the one in February at Parkland, Florida.

That attack left 17 dead and spawned a nationwide youth-led campaign for gun control.

The local education authority said “possible explosive devices” had been found at the school, as well as off-campus.

“Law enforcement is in the process of rendering them safe. School has been evacuated,” tweeted Santa Fe Independent School District.

district confirmed that people were injured in an “active shooter” incident as classes began on Friday morning.

They later added that “possible explosive devices” were located at the school, as well as off-campus.

Sheriff Gonzalez said his officers were tackling a “multiple-casualty incident”, but the final number of dead is unclear.

He earlier tweeted: “An injured police officer is being treated, the extent of his injuries are unknown.”

Several students described hearing a fire alarm go off shortly before 08:00 local time. It is not clear how the alarm was activated.

One witness told KTRK-TV the shooting happened in her art class, and that one person shot was a girl.

“There was someone that walked in with a shotgun and started shooting,” the student said, “and this girl got shot in the leg.”

She said that she did not get a look at the shooter, because she ran to hide.

One 10th grader told networks she had an asthma attack while hiding in the woods.

News helicopters filmed students emptying their backpacks in front of armed officers in a field outside the school.

A bomb squad was at the scene, and several helicopter ambulances flew victims to hospital.

Federal officials with the Bureau of Alcohol, Tobacco, Firearms and Explosives (ATF) are helping the investigation.

President Donald Trump, speaking at a prison reform event at the White House, described the attack as “absolutely horrific”.

“My administration is determined to do everything in our power to protect our students, secure our schools, and to keep weapons out of the hands of those who pose a threat to themselves, and to others,” he added.

Two weeks ago, Mr Trump reiterated his call to arm teachers with guns during a speech in Dallas to the National Rifle Association (NRA).

First Lady Melania Trump tweeted: “My heart goes out of Santa Fe and all of Texas today.”

Shortly after the shooting began in the town of about 13,000 residents, a man carrying an American flag, wearing a Trump hat, and carrying a pistol on his hip approached news cameras.

The man, who did not give his name, said his goal was to “get to the school. Make America great again.”

Another man then told reporters “we need prayers”.

“This idiot is walking down the street with a damned pistol on his side where we just had kids get shot,” he said referring to the other man.

“I’m a guns rights person. I have guns. But this idiot is walking down here and saying he needs to make America great again. That’s not what America needs.”