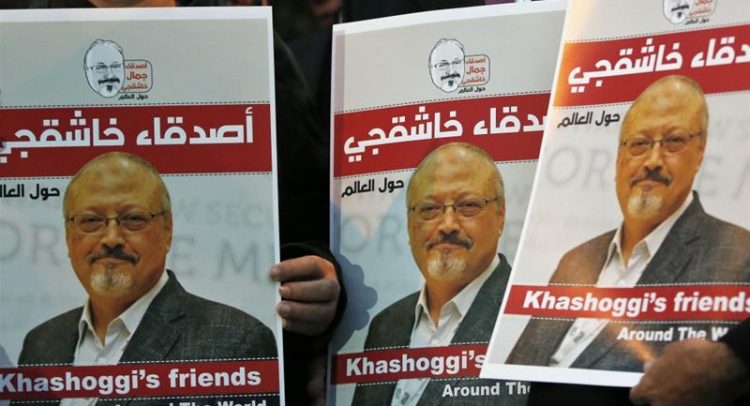 Many leading Saudi activists have stressed that slain Saudi journalist Jamal Khashoggi’s murder remains a political issue, despite alleged efforts by authorities in the kingdom to reduce it to a familial one.

Khashoggi, a well-known journalist in the Arab world who also wrote opinion pieces for The Washington Post, was killed in October 2018 after he entered the Saudi consulate in Istanbul to obtain documents to marry his Turkish fiance. His body was dismembered and never recovered.

The remarks by the Saudi activists came after Khashoggi’s son Salah posted a brief statement on Twitter earlier on Friday, saying his family has pardoned those responsible for his father’s murder.

“In this blessed night of the blessed month [of Ramadan], we remember God’s saying: If a person forgives and makes reconciliation, his reward is due from Allah,” he posted.

“Therefore, we the sons of the Martyr Jamal Khashoggi announce that we pardon those who killed our father, seeking reward God almighty.”

However, Khashoggi’s Turkish fiance, Hatice Cengiz, renounced the statement, saying “no one has the right to pardon the killers” and that she will not stop until justice is done.

It was a sentiment also shared by many Saudi activists, who said they view Khashoggi’s killing as a political rather than a personal issue.

“The murder of Jamal Khashoggi is not a family case, it is not a mistake in a normal context,” said Yahya Assiri, the head of the United Kingdom-based Saudi rights group, ALQST.

“The authorities killed him because of his political work,” Assiri said. “His case is political, so keep silent.”

“We categorically reject the Saudi trial in the Khashoggi case and its resulting judgments,” said the statement.

“The trial is unfair, the Saudi judiciary is corrupt and not independent, and the main suspect in the case is the Saudi Crown Prince, who controls the conduct of the trials.”

It said Khashoggi’s family or some of its members did not have their full freedom to say what they wanted.

“[The] fact is that the issue does not concern Jamal Khashoggi’s family only, but rather is an issue of public opinion as Khashoggi was a political writer who criticised the political system and was killed for that.”

Omaima al-Najjar, a Saudi activist, said it was imperative to continue pushing for Khashoggi’s case as one framed within freedom of speech. It would remain in the public eye for several reasons, she said.

“What we intend to do is continue to flag the case as a fight for freedom of speech and call for an independent transparent trial carried by international laws and not by Sharia laws that enable a murder case to escape penalty through a pardon or blood money,” al-Najjar told Al Jazeera.

“There was never closure of the case since the body was never found,” she said. “The Turkish authorities are also still keeping records of the audio of the killing – which is described by the UN as chilling and graphic – that they could leak at any time.”

Al-Najjar accused the Saudi authorities of trying to find ways to spare the lives of those who committed the crime.

“There have been ongoing trials of the case where international observers are allowed to attend but without translators. The trial has been a complete joke and I would describe it as a theatre.”

‘Martyr for a cause’
Some activists also shared on social media a Saudi Supreme Court document from six years ago that said there can be no pardoning of perpetrators in homicide cases.

Under the Islamic law followed by Saudi Arabia, death sentences could be commuted if the victim’s family pardons the perpetrator.

But activists argue this applies to cases of family disputes or personal grievances, and not in a political case like Khashoggi’s.

“The public prosecution’s framing of the punishment [of Khashoggi’s killers] as ‘retribution’ from the outset made it clear there was an intention to exonerate his murderers by way of a pardon from the family,” said Abdullah Alaoudh, a Saudi academic at Georgetown University.

“Unfortunately, what happened was expected.”

Karen Attiah, editor at The Washington Post for which Khashoggi wrote columns, said his sons had “surrendered and allowed the murderers of their father to go free”.

But Abdulaziz Almoayyad, a Saudi activist based in Dublin, told Al Jazeera he disagreed with any backlash directed towards the Khashoggi family.

“It is immoral for the media to focus such attention on Khashoggi’s family, especially since it is clear they are being pressured by the fascist Saudi regime,” he said.

“They are in the lap of autocracy, and we have no right to criticise or judge what they say,” he added, calling Khashoggi a “martyr for a cause”.

‘Parody of justice’
On Friday, Agnes Callamard, the UN rapporteur for extrajudicial executions, said the “shocking” decision by Khashoggi’s sons to “forgive” their father’s killers was just another step in Saudi Arabia’s “parody of justice”.

Callamard said the move was “the final act in [Saudi Arabia’s] well-rehearsed parody of justice in front of an international community far too ready to be deceived”.

“Act One was their pretence of an investigation,” she said, adding that the team Riyadh sent to help with the probe had in fact been ordered to “clean up the crime scene”, accusing it of “obstruction of justice”.

Nearly a month after Khashoggi’s killing, a report by the CIA concluded that Saudi Crown Prince Mohammed bin Salman (MBS) had issued orders to kill the Saudi dissident.

In September 2019, the Saudi crown prince indicated that he assumed some personal responsibility for the crime since “it took place during his reign”.

Last December, the Saudi judiciary issued preliminary rulings in the case, according to which three prominent officials – Saud al-Qahtani, former adviser to MBS; Mohammed al-Otaibi, the Saudi consul in Istanbul; and Ahmed al-Asiri, the former deputy director of intelligence – were acquitted of the crime.

Around the same time, five people were sentenced to death and three others imprisoned for 24 years for the killing, with the prosecution not revealing the names of the convicts.

The rulings were criticised by the international bodies as a “sham”, pointing that their purpose was for the kingdom to avoid holding the real perpetrators to account.

In the US, chairman of the House of Representatives Intelligence Committee, Adam Schiff, said the rulings were a continuation of the kingdom’s efforts to distance Saudi leaders – including the crown prince – from the brutal assassination, adding that the crime was deliberate and not the result of a sudden decision or abnormal process.

Photo: Khashoggi was murdered in the Saudi consulate in Istanbul and his body dismembered [File: Lefteris Pitarakis/AP Photo]