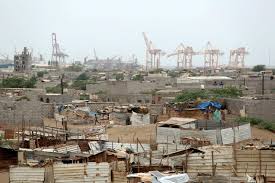 A Saudi-led coalition has made no major gains in its offensive to wrest control of Yemen’s Hodeidah port from the Iran-aligned Houthis, leaving it without the decisive increase in leverage it had sought against the group in U.N.-sponsored peace efforts.

The alliance led by Saudi Arabia and the United Arab Emirates launched the offensive on the heavily defended Red Sea city on June 12 in the largest battle of the three-year war, which the United Nations fears risks triggering a famine.

The Arab states pledged a swift operation to take over Hodeidah’s air and sea ports, without entering the city center, seeking to minimize civilian casualties and avoid disruption of the port, a lifeline for millions in the impoverished state where 8.4 million are believed to be on the verge of starvation.

But they have made little progress in the campaign which Riyadh and Abu Dhabi say aims to cut off the Houthis’ main supply line and force the group to the negotiating table.

The coalition announced on June 20 that it had seized Hodeidah airport, but local military and aid sources told Reuters that neither side has complete control of the airport and its surrounding area, which spreads over 20 km (12 miles).

A pro-coalition Yemeni military source said the Houthis hold the northern outskirts of the area while coalition-backed forces are trying to maintain their positions along the southern edges.

A senior aid official said coalition forces had initially penetrated the perimeter of the airport. “But that was short lived for less than 24 hours and they were pushed out,” the official, who spoke on condition of anonymity, told Reuters.

Coalition spokesman Colonel Turki al-Malki reiterated that the airport was now under the control of the alliance although Houthi fighters continued to launch “indirect fire” from surrounding areas into the airport.

“The coalition is in full control of the airport. There are no Houthi fighters within the airport perimeter,” he told Reuters on Monday.

UAE officials did not respond to Reuters request for comment.