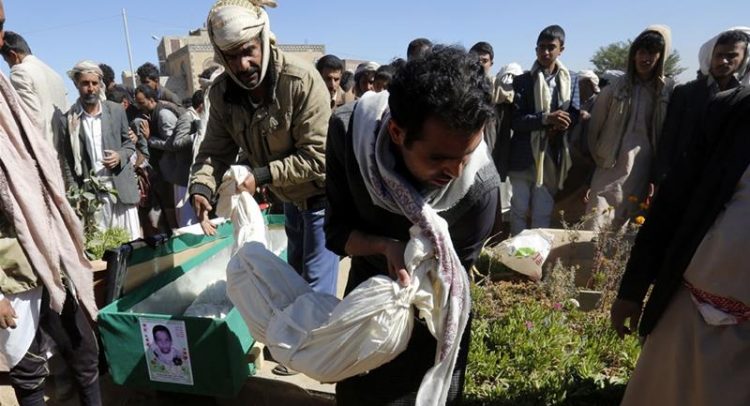 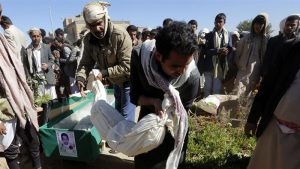 The Saudi-led coalition that is fighting Houthi rebels in Yemen is responsible for the deaths of scores of children since last summer, a United Nations report says.

Al Jazeera obtained excerpts from the confidential report by the UN Office on Children and Armed Conflict, which was sent to the UN Security Council on January 19.

According to the excerpts, the Saudi-led coalition killed 68 children and wounded 36 others from July to September 2017.

The report found there were at least 20 coalition raids every day – some targeting schools and homes.

Saudi Arabia, together with several other Arab nations, launched a military campaign in 2015 that aimed at rolling back advances made by Houthi rebels after they overran much of the country, including the capital, Sanaa, in 2014.

The Saudi-led intervention initially consisted of a bombing campaign and later saw a naval blockade and the deployment of ground forces into Yemen.

The coalition says it is attacking positions of the Houthi rebels in response to a request from the internationally recognised government of President Abd-Rabbu Mansour Hadi.

Houthi killings
In addition to the coalition, the UN report also points fingers at the Houthis, blaming the rebels for the deaths of 18 children since last summer. Another 29 children were wounded in attacks by Houthis in the same period, the report says.

The report also notes that recruitment of children to fight has increased, particularly by the Houthis and the Yemeni National Army.

The UN describes the situation in Yemen as “the worst man-made humanitarian crisis” in the world, with the ongoing conflict making an already dire situation worse.

Speaking to Al Jazeera from Sanaa, Shabia Mantoo, spokesperson for the UN refugee agency, UNHCR, said thousands in Yemen are in desperate need of aid.

“So, children, women, the elderly, people with particular vulnerabilities; they are suffering the most in Yemen at the moment,” Mantoo said.

According to the UN children’s aid agency, UNICEF, more than 5,000 children have been killed or injured in the war – an average of five children a day – since the conflict escalated in March 2015.

In addition to a massive cholera outbreak, Yemen has also seen outbreaks of diphtheria in recent months.

Suze van Meegen, spokesperson of Norwegian Refugee Council (NRC) in Yemen, said it is time the international community wakes up to the humanitarian situation in the country.

“It is astounding to me that we have the United Nations Security Council that has not commented on Yemen in, now more than seven months. The scale of suffering in Yemen is incomparable. We have 22 million people in need.

“We are speaking to families who are fleeing their homes because of violence and constructing houses out of plastic bags. People don’t have enough to eat. They’re forced to eat whatever they can find.

“This sort of suffering is inexcusable, and we would really like to see some action taken from the US, the UK and the United Nations Security Council,” Van Meegen told Al Jazeera.