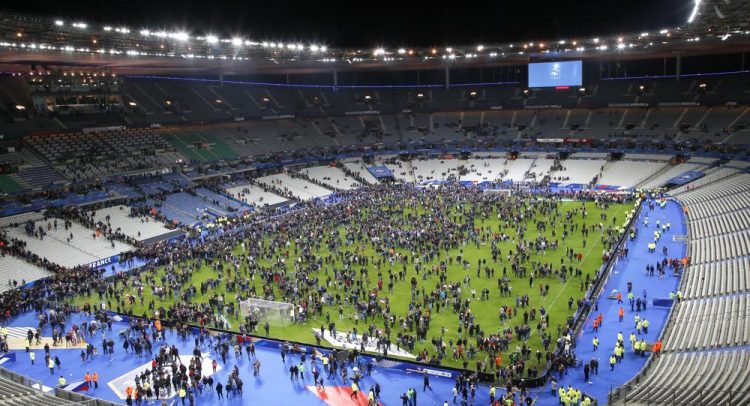 PARIS (AP) — Victims of the November 2015 terror attacks on Paris began testifying Tuesday about the night that left 130 dead and dozens more wounded, and the scars it has left among the first to witness the bloodshed that night.

Testimony started with the patrol of mounted gendarmes who witnessed the first two suicide bombings at the French national soccer stadium. The gendarmes, who numbered 13 that night, were working crowd control outside the stadium for the France-Germany match and absorbed the shockwaves from those explosions. Many went home that night with flesh and debris embedded in their uniforms.

Fourteen people are on trial in Paris, including the only surviving member of the Islamic State group cell that attacked the city on Nov. 13, 2015. Another six people are being tried in absentia.

One man died in the triple suicide bombings at the stadium.

Philippe was among several gendarmes overcome by emotion as they testified. Court rules don’t allow the full use of officers’ names.

“Gendarmes, police, firefighters, we’re all trained to respond. It’s our job,” he testified. “This evening, what struck me is that we were at the explosion. We had to absorb the shock, understand what was happening and improvise until our normal reflexes kicked in.”

His commander, Jonathan, said he fought his commanding officers for months to get psychological support for the 12 mounted men and women.

“I was alone, facing the unknown and the incomprehension of my direct supervisors,” he testified. “We are gendarmes, we are trained for this. When I see the state this put us into, then I can imagine what it must have done to the victims and their families.”

Victims testimony is due to last five weeks, and the trial is scheduled to last nine months.

FILE – In this Nov.13, 2015 file photo, spectators invade the pitch of the Stade de France stadium after the international friendly soccer France against Germany, in Saint Denis, outside Paris. On Nov. 13, 2015, a cell of nine Islamic State militants armed with automatic rifles and explosive vests left a trail of dead and injured at the national stadium, Paris bars and restaurants and the Bataclan concert hall. (AP Photo/Michel Euler, File)