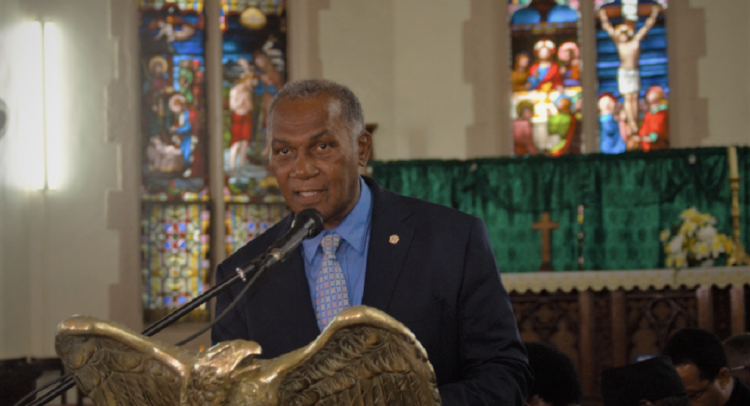 Basseterre, St. Kitts, August 02, 2018 (SKNIS): At the National Inter-Faith Thanksgiving Service in celebration of the 70th Anniversary of the founding of the University of the West Indies (UWI), at the St. George’s Anglican Church in Basseterre on July 31, alumnus of the university and Minister of Ecclesiastical Affairs, Senior Minister the Honourable Vance Amory, commended the UWI for the positive impacts it has made on the lives of those who were educated at the premier tertiary education institution in the British West Indies.
“All of us in this room can say without any question of doubt that the University of the West Indies has impacted our lives,” he said, while noting that the university has been of great influence to those who had the fortune of attending.

“We are also aware that the university was created for an important purpose and that is to provide the type of intellectual capacity and the quality of human resource to lead and guide and develop the people of the Caribbean,” Senior Minister Amory said. He noted that the UWI has fulfilled its mandate by producing persons with significant intellectual capacity and professional skills over the past 70 years. He also said that as alumni, there is a responsibility to use the skills learned and knowledge gained to serve and give back.

“We therefore have as beneficiaries of that vision to create a University of the West Indies—we have a responsibility to serve our people and to lead them to greater things in the future,” he stated. Minister Amory highlighted that the UWI has set a high standard for learning and welcomes a great cultural mix from persons around the world. He said that the educators at the university push students to be their very best to produce excellence.

“Today I am honoured to express on behalf of all of us alumni of the university how appreciative we are of what the university has done for us and by extension what it has done for the people of
our country through us,” he added. The University of the West Indies was founded in 1948 with the mission to unlock West Indian
potential for economic and cultural growth by high quality teaching and research aimed at meeting critical regional needs, by providing the West Indian society with an active intellectual centre and by linking the West Indian community with distinguished centres of research and teaching in the Caribbean and overseas.

The service was attended by many distinguished alumni of the UWI including Governor-General of St. Kitts and Nevis, His Excellency S.W. Tapley Seaton; Prime Minister of St. Kitts and Nevis, Dr. the Hon. Timothy Harris, who read the second lesson from Mark 10:42-52; Senior Minister and Minister of Ecclesiastical Affairs in the Federal Cabinet, Hon. Vance Amory; Leader of Her
Majesty’s Loyal Opposition, the Right Hon. Dr. Denzil Douglas, who read the first lesson from Deuteronomy 6:4-9, 20-25.

Remarks on behalf of the Vice Chancellor of the UWI were given by Mrs. S. Sarah Owen of the UWI Open Campus; the homily was done by Rev. Mark Christmas; and the benediction delivered by Venerable Archdeacon Isaiah Phillip. The Rastafarian community and the Coptic Orthodox Church were present and participated in the intercessory prayer.