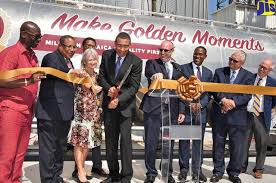 Manufacturing conglomerate Seprod Limited has already secured at least one customer in the Caricom market and is looking to export its first batch of flour by month-end.

The company, which officially opened its grains mill yesterday and launched its Gold Seal flour, will shortly after pursue the export of corn products to snack manufacturers across the Caribbean, in keeping with strategic goals to tackle import distribution throughout the region.

General Manager for Seprod subsidiary Jamaica Grains and Cereal Limited (JGCL) Jeffrey Moss Solomon would not disclose the market that the goods were intended for, but noted that the products form part of Seprod’s target to export 50 per cent of production capacity.

Currently, JGCL is able to produce over 5,000 45kg bags of flour and 1,500 bags of cornmeal daily, while storage in the company’s five silos total roughly 25,000 tons. JGCL sells both in bulk trucks and retail size Stock keeping units (SKUs}, and will increase corn and flour supply to local and regional markets by 400 per cent.

The company also confirmed that it has invested little over $5 billion in new technology, staff training along with strategic partnerships, and has doubled production workers to 88 individuals, up from 40.

Plans are to grow sales of $16.2 billion by 60 per cent at the end of Seprod’s financial year. According to CEO Richard Pandohie, the growth will be led by the reorganisation of distribution operations, consolidation of the dairy business, and reining in the losses from sugar.

The manufacturing company has already acquired a 9,262 square-foot property adjacent to its Marcus Garvey Drive head office, with a view to expanding its warehousing and distribution business.

Pandohie told the Jamaica Observer that the company is now completing engineering designs for the warehouse and is also going through a bidding process to find a contractor. Seprod intends to use the warehouse as a central point for distribution of its entire production line, creating a one-stop shop for all major wholesalers and distributors.

“The project may take one-and-a-half to two years to complete, but we expect to start in the third quarter of this year,” he said.

“One of the weaknesses that we have in our system is around our distribution capabilities when you compare it to companies like Wisynco. We are going to be centralising a lot of our distribution operation; we are near to port and we can get synergies by collapsing a number of the discrete warehouses into one location,” Pandohie continued.

He told the Caribbean Business Report that the company will also be applying for a special economic zone permit, to assist with growing the brand regionally. What’s more, Seprod hopes to close on the acquisition of a local distributing company by August.

“We are looking at a number of acquisition opportunities; one has been identified but we would have to call an extraordinary general meeting to let the shareholders know. So we are not in a position to say that yet,” he said.

Seprod’s plant was upgraded in 2017 to the tune of $3 billion, in a joint venture initiative with Seaboard Corporation, adding a state-of-the-art flour mill and a grain terminal at Kingston Wharves for the receipt of grain shipments.

The investment facilitated the company’s foray into flour production under the Gold Seal brand, a move which now sees the company producing counter flour, baking flour, whole wheat flour and specialty value-added products. The investment will also allow JGCL to increase its cornmeal production to better satisfy demand throughout the Caribbean.