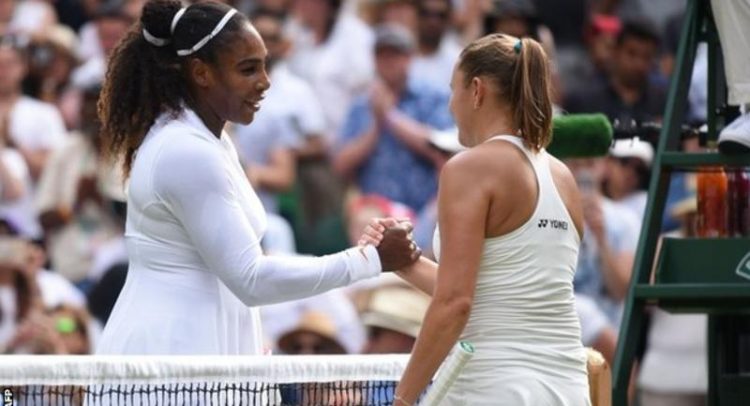 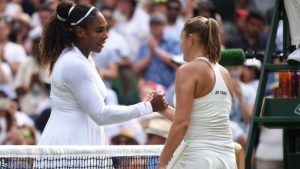 In what was a rare meeting between mothers at this stage of a Grand Slam tournament, Williams was in control throughout a 6-2 6-2 victory.

Rodina, whose left thigh and right knee were taped, often moved slowly and could not deal with Williams’ power.

‘Seas have parted for Serena’
With none of the top 10 women’s seeds left in the draw, Williams is becoming a stronger favourite to win a 24th Grand Slam title and her first since giving birth last September.

Some may argue she has yet to face a stiff test here – she has beaten players ranked 105th, 135th, 62nd and now 120th in the world – but they cannot argue with the fact she only returned to competitive singles tennis in March and has now reached another Grand Slam quarter-final.

Nine-time Wimbledon champion and BBC pundit Martina Navratilova said: “She’s been healthy here, hitting the ball hard and the seas have parted for her.”

Williams delivered 30 winners – compared to only five from Rodina – and 10 aces, breaking early in both sets.

There was still the odd sign of rustiness – she sent a simple forehand smash into the net in the seventh game of the first set and at times was unable to deal with Rodina’s soft serves – but she marched through the match in only 64 minutes and has yet to drop a set at this year’s Wimbledon.

Rodina, who had earned just over £54,000 in prize money this year, quadrupled her total with the £163,000 she takes home for reaching the fourth round.

By reaching the quarter-finals, Williams will return to the world’s top 100 when the rankings are released next Monday and could make the top 20 if she wins the title.