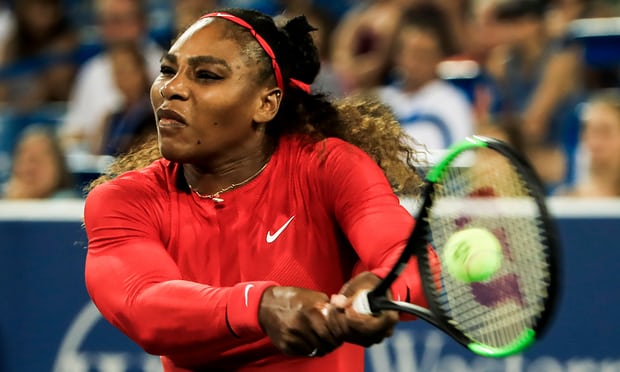 Serena Williams has addressed the extenuating circumstances around her shocking collapse against Johanna Konta at a tournament in San Jose earlier this month, saying her focus was compromised upon hearing the man convicted of killing her half-sister, Yetunde Price, had been released from prison only minutes before she took to court.

The 23-time grand slam singles champion suffered the heaviest defeat of her career in a 6-1, 6-0 defeat to the British No 1, marking the first time she has ever lost a match without winning at least two games.

But in a wide-ranging interview with Time magazine published on Thursday, Williams said she learned that her sister’s killer had been released from prison while scrolling through Instagram about 10 minutes before she walked on court.

“I couldn’t shake it out of my mind,” Williams told Time of the release of Robert Maxfield, a former Southside Crips member who was freed on parole three years early due to good behavior. “It was hard because all I think about is her [three children] … and what they meant to me. And how much I love them.”

Williams added: “No matter what, my sister is not coming back for good behavior.”

Speculation over the stunning scoreline began almost immediately after Konta finished off Williams in just 53 minutes, with four-time grand slam doubles champion Rennae Stubbs among the first to cite Maxfield’s release as a potential factor.

“Her sisters killer is released from prison which would have been an OVERWHELMINGLY difficult thing to digest, she played a world class opponent who played as good as we know shes capable of. She battled & will be back,” Stubbs tweeted. “Sometimes we have 2 take into account extenuating circumstances & even the greats @serenawilliams have really tough emotional/competitive days. @JohannaKonta at her best is 1 of the best players in the world, this was a perfect storm, Jo deserves credit SW deserves understanding.”

Williams did not mention Maxfield in her post-match press availability, though she did mention her focus was compromised.

“I have so many things on my mind, I don’t have time to be shocked about a loss,” Williams said at the time. “I clearly wasn’t at my best. I can only try to be there. When I was out there, I was fighting. I wasn’t just giving it away. I was moving a lot better – I’m just trying to take the positives.”

Price, who worked as the personal assistant to Venus and Serena, was 31 when she died in a 2003 drive-by shooting not far from where they grew up in the Compton district of Los Angeles.

Brazil's Marfrig to sell U.S. unit to Tyson for $2.5 billion

China 'training for strikes' on US targets