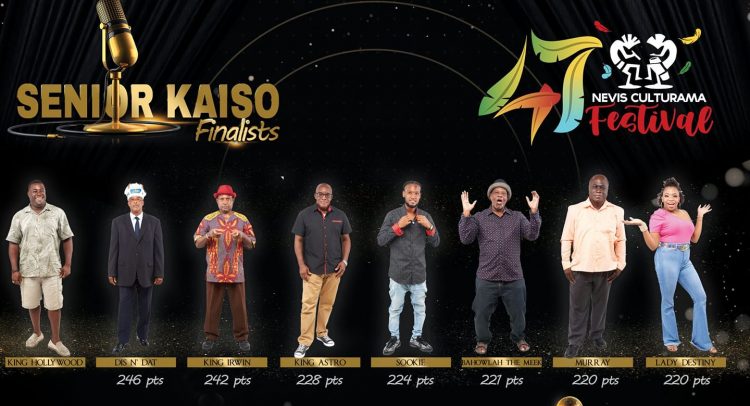 Basseterre, Monday, 6th September, 2021, (MyVue News.com) – Eight (8) of Nevis’s top calypsonians will be butting heads next week in the Finals of the 2021 Culturama Senior Kaiso Competition.

This year’s bacchanal will be fiery with 4 of the competitors already knowing what it is like to be crowned calypso king.

However, leading the charge against reigning King Hollywood, will be former kings, Astro, Dis N Dat and Bahowlah The Meek.

They will be joined by Sookie, a former 4 peat Junior King and King Kirwin, who is a former Junior Culturama Calypso winner.

There will also be Murray and the lone female contender Lady Destiny, who is making it to the finals for the first time after making her first attempt in 2019 but failed to go past the elimination stages.

One surprise exclusion from the final cut of contenders is Kairo (K’Jel Smitthen), whom many thought should have found a place amongst more experienced practitioners.

Chairman of the Culturama Committee, Abonaty Liburd, says this year’s Senoir Caslypso Finals will be a keenly contested event, given the high quality of songs and music featured in this year’s masterpieces.

Abonaty feels that each of the finalists will be forced to bring their “A-game” to the stage if they are to gain a place in the top 3.