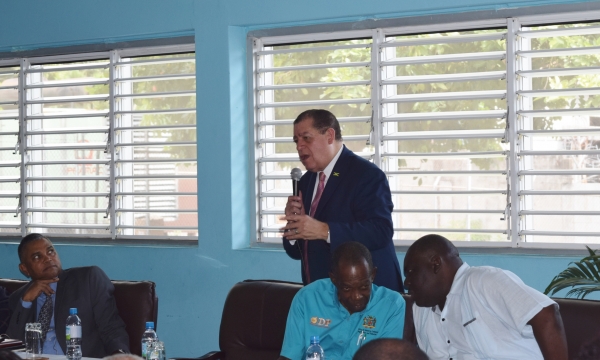 Shaw calls on J’cans to invest more in idle lands

New Minister of Industry, Commerce, Agriculture and Fisheries, Audley Shaw, has reiterated calls for Jamaicans to invest more in farming on idle lands across the island.

Speaking at the St Mary Agricultural Show at Gray’s Inn Sports complex, Annotto Bay, St Mary, yesterday, Shaw said more investments from Jamaicans are needed in the agricultural sector, “so that we can ensure food security and decrease our importation to satisfy the demands of our local market”.

“In Jamaica, we are too blessed with so many acres of idle lands. We have got to put them into production,” the minister emphasised.

“I am tired to see idle lands [of which] a lot was in sugar, and all over the world, sugar is a declining business, but even in sugar, we can rationalise our sugar lands and make them produce more efficiently while we make other lands available for  use,” he added.

The minister pointed out that numerous hectares of idle lands already have irrigation, which investors will not have to worry about before planting.

“Plenty of the idle lands are between St. Catherine and Clarendon. There are 18,000 hectares that are idle, and 70 per cent already has irrigation,” he noted.

Shaw also called on more Jamaicans to set up small gardens in their back yards, as is done in other developed and developing nations.

“Last week, I went to a conference in Argentina in a place called Mendoza, and when I was flying across the South American continent (Colombia, Chile, Uruguay, Paraguay and Argentina), all I could see is production. Everywhere, something was being produced, whether grapes or corn…Where you don’t see crops growing, you see cattle. When I fly over Jamaica, I am tired to see idle lands,” he said.

The minister pointed out that countries such as Guatemala, Costa Rica and the Dominican Republic export a lot of fresh vegetables and processed foods to the United States, and Jamaica needs to do more of this.

Shaw said since he has been working in the capacity of Minister of Industry, Commerce, Agriculture and Fisheries, he has been impressed by the interest, involvement and initiatives of youth in agriculture.

“I’ve seen so much initiative and enterprise. I’ve seen so many young entrepreneurs who are committed to doing something and devising new products from our locally produced material, and this is how we are going to move in Jamaica, from poverty to prosperity,” he said.

The St Mary Agricultural Show was being held for the 32nd year, under the theme ‘Climate Smart Agriculture, the Key to Food Security’.

Annually, the event is hosted to bring farmers from the parish of St Mary, neighbouring parishes and other stakeholders together, where ideas for innovation are shared, along with the introduction of new technology, which they can incorporate in their practice.