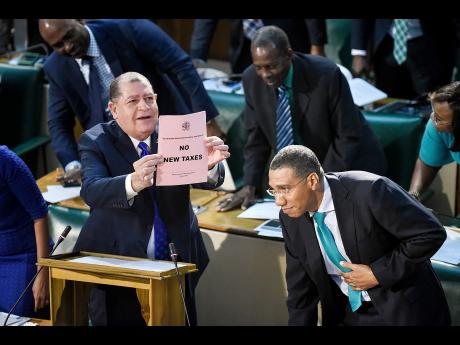 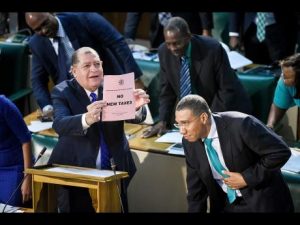 Armed with the traditional pink book, which usually contains the dreaded revenue measures, Finance and the Public Service Minister Audley Shaw yesterday paraded the tax book before Parliament. But on the cover was emblazoned ‘No new taxes’. Shaw, in his inimitable ‘man-a yaad’ style, led Government members in a chorus of ‘No new taxes!’ as they seemingly taunted their opposition counterparts in parliamentary banter.

“Every year, the tax measures have been put in a little pink book, so I ordered the pink book this morning (yesterday), and I told them to write on it ‘No revenue measures for Fiscal Year 2018-2019. Read my lips, ‘No new taxes’,” Shaw related.

According to the finance minister, “For the first time in 14 years, there is some relief for the Jamaican people. This administration has taken the decision that there will be no new taxes imposed on the people of Jamaica in our budget for the Fiscal Year 2018-2019 budget year,” Shaw declared to heavy thumping of the desks by government MPs.

He noted that for years, with the exception of 2004-2005, the Jamaican people have had to face increased taxes. Shaw told his parliamentary colleagues that with increased compliance measures, tax revenue has been buoyant.

Explaining how the Government would finance the Budget for the new fiscal year, Shaw noted that

– tax revenue is budgeted at $518.4 billion and is expected to account for 87.8 per cent of total revenue grants.

– capital revenue is programmed to be $2.1 billion, representing a 45.1 per cent decline, compared with projected inflows for the 2017-2018 financial year.

– grants are projected at $9.1 billion, representing 0.4 per cent of GDP, reflecting an increase of 101 per cent.