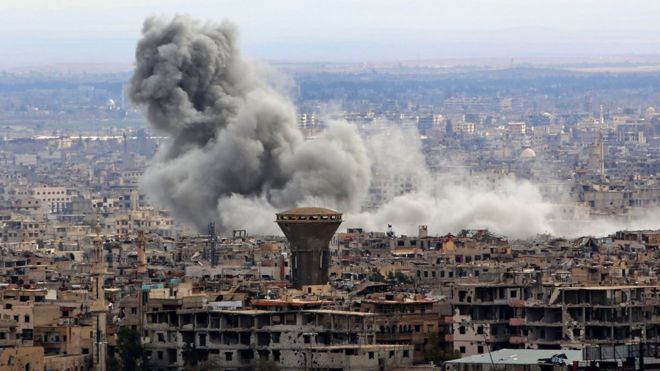 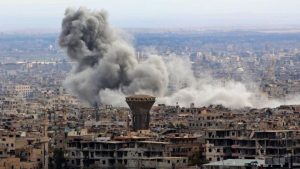 Fighting continued in the rebel-held Eastern Ghouta area in Syria during the first daily five-hour “pause” ordered by the government’s ally Russia.

As a result, there were no UN aid deliveries or medical evacuations.

Some 393,000 people are trapped in the enclave near Damascus, which has been besieged by the government since 2013.

Medics say more than 500 people have been killed since the government intensified its bombardment nine days ago in an attempt to retake the enclave.

Meanwhile, France has urged Russia to use its influence over Syrian President Bashar al-Assad to secure a 30-day truce covering the whole country.

The UN Security Council unanimously passed a resolution demanding a nationwide cessation of hostilities on Saturday, but it did not specify a start date.

“Russia is one of the only actors that can get the regime to implement the resolution,” French Foreign Minister Jean-Yves Le Drian told his Russian counterpart Sergei Lavrov at a meeting in Moscow.

What is happening on the ground?

A spokesman for the UN Office for the Co-ordination of Humanitarian Affairs (OCHA) said it had received reports that fighting continued after the Russian-ordered pause began on Tuesday morning.

“Clearly, the situation on the ground is not such that convoys can go in or medical evacuations can go out,” Jens Laerke told reporters in Geneva.

The Syrian Observatory for Human Rights (SOHR), a UK-based monitoring group, said the situation in the Eastern Ghouta had been relatively calm overnight.

But it reported that in the first two hours of the Russian-ordered “humanitarian pause”, a number of shells hit the towns of Douma, Harasta and Misraba.

Later, it reported air strikes, including the dropping of two barrel bombs on the town of al-Shifuniya, and rocket fire.

The Syrian Civil Defence, whose volunteer rescue workers are widely known as the White Helmets, said one person was killed in Douma by shellfire. But the Syrian Observatory said the attack happened before the pause began.

The Syrian state news agency, Sana, reported that “terrorists” had shelled the route of the humanitarian corridor leading to the government-controlled al-Wafideen Camp, which is north-east of Douma, and were using “human shields”.

Russian media said not a single civilian left the besieged area as a result.

The accusation of firing mortars was denied by the rebels, while the Syrian military said it had not carried out air strikes.

What was supposed to happen?

The Russian defence ministry announced that government forces would “cease strikes on terrorists” from 09:00 until 14:00 local time (07:00-12:00 GMT) daily “with the aim of immediately saving the peaceful population”.

One “humanitarian corridor” had been prepared, with help from the Syrian Arab Red Crescent, to allow civilians to leave and the sick and wounded to be evacuated, it said.

Residents would be informed via leaflets, text messages and videos, it added.

Buses and ambulances were waiting at the al-Wafideen checkpoint on Tuesday.