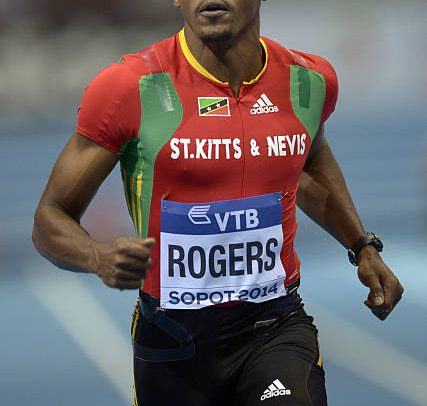 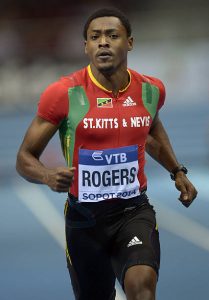 Basseterre, St. Kitts, Tuesday, 31st July, (MyVueNews.com)- Once again St. Kitts and Nevis has demonstrated that it continues to be a dominant force in international track and field.
The twin-island state picked up a silver medal at the 2018 Central American & Caribbean Games, (CAC), now taking place in Barranquilla, Columbia.

This time around, it is the ace sprinter, Jason Rogers, who ran his way into the history books by capturing the Silver Medal in the 100m, with a time of 10:15 seconds, on Monday night, 30th July, 2018.
Rogers was edged out by the Jamaican Nesta Carter, who clocked 10:07 for the Gold, while Cejhae Greene of Antigua & Barbuda took honours with the Bronze Medal, reaching the finish line at 10:16 seconds.

The remaining places were taken by Barbados’ Mario Burke, followed by Javoy Tucker of Jamaica, Guzan Valdez from the Dominican Republic, Berenguer Mena of Cuba and in eight place, Barbados’ Burkheart Ellis.
Rogers is also his country’s number one sprinter after he successfully defended his title at the National Championships held in June.

Jason’s sprint colleague, Shenel Crooke, who is also competing at the Games, made it to finals of the women 100m, finishing in the sixth position, with a time of 11:53 seconds. Winner of that race was Jamaica’s Jonielle Smith, (11:04), followed by Khalifa St. Fort of Trinidad & Tobago, (11:15) and in third place, with 11:32 second, was Andrea Purica Guevara of Venezuela.
The CAC Games are continuing today with almost 6,000 athletes from some 37 countries.

Iran rejects Trump offer of talks as 'humiliation', without value