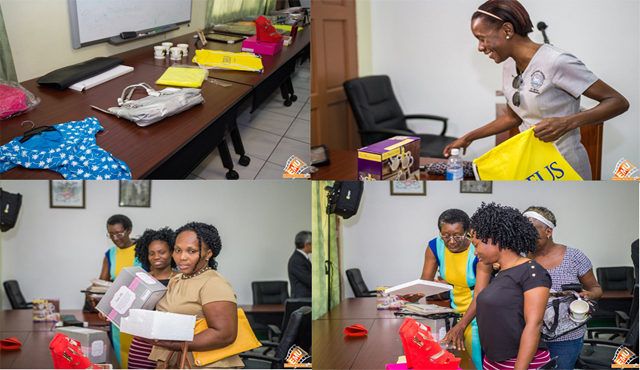 Basseterre, St. Kitts, August 01, 2019 (SKNIS) Several goods, including children items, gift sets, male and female clothing, sporting equipment, electrical devices, household items and stationery among other things were donated to the Government of St. Kitts and Nevis to be distributed to charity and faith-based institutions, hospitals and daycare centers, as well as other organizations in an effort to meaningfully benefit a number of persons.

The items were donated by the SimplyHelp Foundation, a non-profit organization based in Los Angeles, United States of America. They were accepted during a handing over ceremony at the Ministry of Education’s Conference Room located at the Irish Town Primary School on Wednesday, July 31, by the Honourable Shawn Richards, Deputy Prime Minister and Minister of Education (MOE), on behalf of the government and by extension the various organizations and persons who will benefit from the donations.

Minister Richards expressed thanks to SimplyHelp and the Embassy of the Republic of China (ROC) Taiwan in St. Kitts and Nevis. He added that the name SimplyHelp says it all.

“SimplyHelp, easily giving to others. That is what we are here to do once more this year, giving to persons especially persons who are in need,” said Minister Richards. “And of course we must say a very special thank you to the Taiwanese Embassy and to SimplyHelp for once more coming forward and making these donations possible.”

Deputy Prime Minister Richards said that the items will benefit a wide range of persons in St. Kitts and Nevis, and highlighted the importance of children receiving some of the items.

“We see items that will benefit children, children who do not have the ability to buy for themselves, but who depend on parents who quite often, because of different competing expenses, have to make sacrifices and in many instances are not able to provide for their children as they would like to,” he said. “SimplyHelp is helping to make this possible again this year.”

Resident Ambassador of the Republic of China (Taiwan) to St. Kitts and Nevis, His Excellency Tom Lee, said that SimplyHelp Foundation is dedicated to assist persons who are less fortunate. He used the occasion to extend “sincere appreciation to SimplyHelp for the kind gesture,” and to the Government of St. Kitts and Nevis “for distributing these items.”

According to Tricia Esdaille, Senior Assistant Secretary within the Ministry of Education, SimplyHelp has been working in St. Kitts and Nevis in partnership with the Taiwanese Embassy and MOE.

“The organization has been working since 2016 through churches and community groups in the Federation to reach out to persons and to extend to them various goods, tokens, materials and resources which they can make use of personally,” she said.

The SimplyHelp Foundation was formed in 2000 by a Taiwanese national, Tina Bow, and is active in 23 countries with a strong presence in Central America and South East Asia. Its purpose is to work to empower people living in poverty so that they can sustain themselves and their families in their own environment.