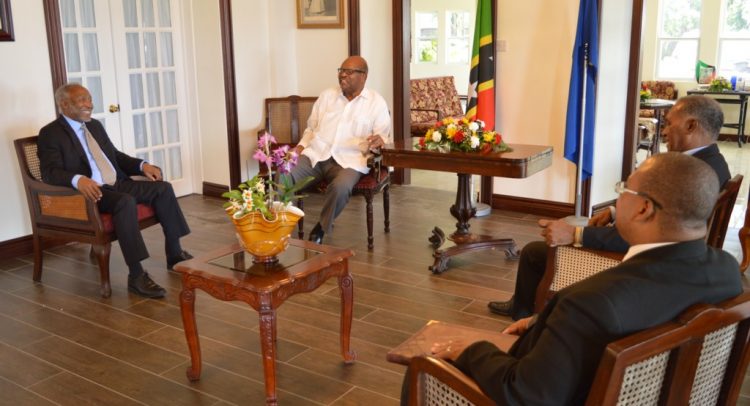 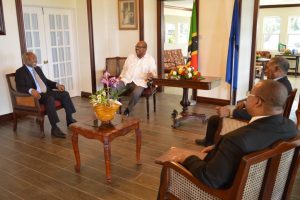 Basseterre, St. Kitts, May 17, 2018 (SKNIS): Sir Clare Roberts, KCN, QC, of Antigua, is in St. Kitts and Nevis to meet with stakeholders in the field of Labour as efforts to reform labour administration gain momentum.

Sir Clare arrived on Tuesday (May 15) evening and got straight to work the following morning paying courtesy calls on Governor General, His Excellency Sir S. W. Tapley Seaton, at Government House, as well as Senior Minister and Minister of Labour, Honourable Vance Amory, at Government Headquarters. Later that day, Sir Clare had his first working meeting with union officials, who represent workers across various fields in the twin island Federation.

Thursday’s (May 17) agenda includes meetings with employer representatives as well as public sector officials, while Friday (May 19) will be marked by discussions with a wide group of stakeholders. Permanent Secretary in the Ministry of Labour, Ron Dublin-Collins, noted that the arrival of Sir Clare as a consultant marks another milestone in the government’s labour reform agenda.

“At this stage, it means that our agenda is well underway to become a reality in terms of [establishing] a new Labour Code,” he stated, adding that numerous consultations have been held with members of the National Tripartite Committee and other partners. “Over the past 12 or so months, we have advanced our discussions, moved the agenda forward, and it has resulted in a decision to have this consultant.”

The International Labour Organization (ILO) is funding Sir Clare’s consultancy, which is expected to last for three months. He will examine 15 pieces of existing legislation with the associated Statutory Rules and Orders such as the Recruitment of Workers Act, Accident and Occupational Diseases Act, Apprenticeship and Tradespersons Qualification Act, Labour (Minimum Wage) Act, Protection of Employment Act, Trade Unions Act, Equal Pay Act and the Government Auxiliary Employees Act among others. The revision and consolidation of these laws will conform to international standards.

Mr. Dublin-Collins noted that Sir Clare is “an excellent legislative draftsman” with more than 40 years in the legal profession. He is highly respected around the Caribbean region and has performed similar work in a number of countries. The permanent secretary also commended the stakeholders for their involvement to date.

“There has been real dialogue, real discussion. There are points of disagreement and they are always done in a very respectful manner in which each individual and interest group can present its own idea and we can look at … what would be the best compromise going forward,” Mr. Dublin-Collins said.

He added: “we want by the end of the process that we have a Labour Code that works in the best interest of all concerned; it ensures industrial peace; it takes into consideration the current trends and the changes that continue to exist in our labour market.”

Sir Clare is expected to complete his work in August 2018. Labour officials expect to submit a draft of the new Labour Code to the Cabinet for consideration in October 2018.