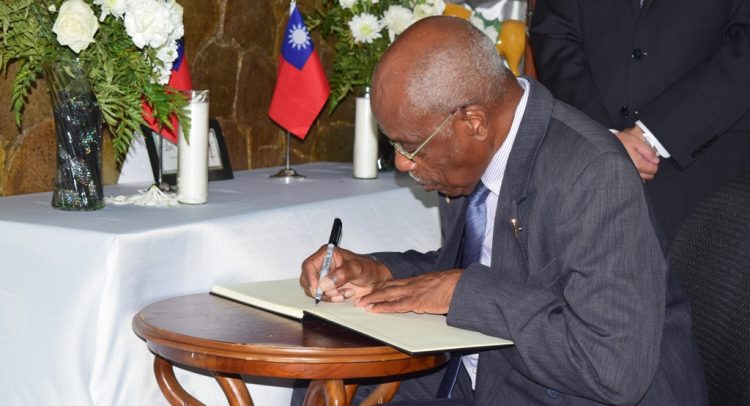 “He has left an enduring legacy not only because he was the first democratically elected president and therefore, in a sense led the way in the democratization of Taiwan, but because of the sweeping changes that he made towards the development of Taiwan,” said Sir Kennedy, adding that he has a “very lasting and very special memory of President Lee.”

Sir Kennedy reflected on the relationship between St. Kitts and Nevis and the Republic of China (Taiwan), which has served both countries well for the past 36 years.

“The people of St. Kitts and Nevis have always had a very special relationship with the people of Taiwan… and I am very happy that I was, in fact, the person who established diplomatic relations with the Republic of China (Taiwan) at a time when it was not such a universally popular thing to do and we have never regretted it,” he said.

“I feel very proud today… on this occasion, sad, but it is also memorable to celebrate the contributions of persons like President Lee Teng-hui who forged a path of progress and democracy for his country and as a beacon for the rest of the world,” said the Ambassador.

Sir Kennedy and Ambassador Byron were invited to Taiwan in April of 1988 by President Lee to undertake a state visit.

Governor-General, His Excellency Sir Tapley Seaton; Prime Minister of St. Kitts and Nevis, Dr, the Honourable Timothy Harris; Premier of Nevis and Minister of Foreign Affairs and Aviation in the Federal Government, the Honourable Mark Brantley and Josephine Huggins, Cabinet Secretary are among persons who have since signed the book.

The book will be available to sign until Friday, August 14, 2020, and Ambassador Lee is inviting interested persons to visit the Embassy to do so.

55% of respondents say The Queen must go