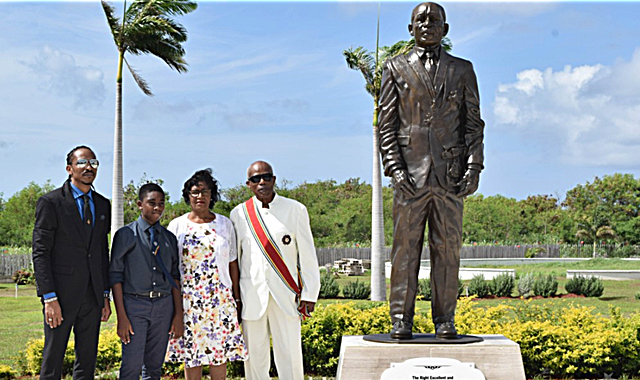 Sir Kennedy stood with a sense of pride and humility, character traits often associated with him, as the purple silk cloth was removed by his wife Lady Mary Simmonds, to reveal a lifelike statue of the Federation’s first Prime Minister, who served from 1983 to 1995. The statue is a feature at the National Heroes Park.

“While I was living my life and doing what I think I was supposed to be doing, such a thing (National Hero designation) was never in my mind, and so [I am] especially grateful. I’m humbled and I am honoured by the fact that I am here today to witness and to share in this ceremony to unveil these statues,” Sir Kennedy stated.

The scene seemingly became even more overwhelming after the ceremony, as many persons rushed to take pictures with Sir Kennedy next to the monument. Students were given priority status, while many had to wait in line as there were numerous cries for one more photo. Sir Kennedy remained graceful and accommodated everyone who wanted a photo.

“I’m glad that they wanted to … have my face in their homes or in their albums … and as I said I appreciate their desire to have a memento of this occasion and of me to share with their children and their grandchildren,” Sir Kennedy stated. “It’s an indication that long after I am gone that there will be persons who will remember, even to ask and then to be told.”

In addition to the statues, information and photos of all five National Heroes will be displayed in the park’s Welcome Centre.

During the reading of the profile of the Federation’s first prime minister, his deep commitment to advancing educational opportunities for others was cited. It was reportedly rooted in his belief that “education is a great equalizer,” as it can enhance opportunities for underprivileged children. That belief holds true today.

“Work hard, learn and pay attention to lessons,” he said, repeating his ingredients for success. “Play hard regularly. Compete but be sportsmanlike in all that you do; and remember you can reach the highest heights. You can be anything that you wish to be because we have within us God-given abilities and it is up to us, this generation and every generation, to use those abilities wisely, to use them not only for ourselves but for the good of friends, neighbours, family and for the nation on a whole.”