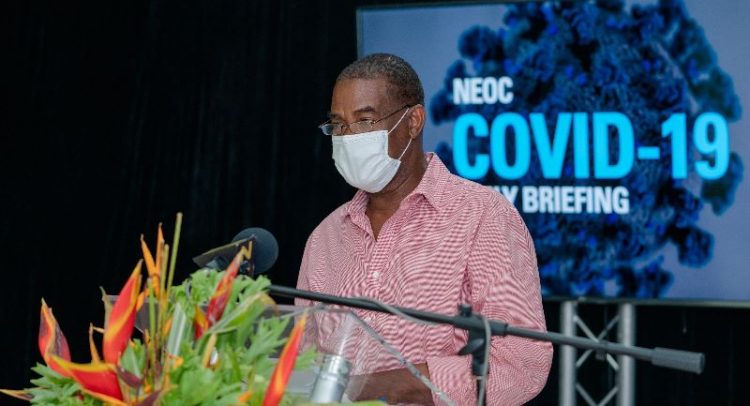 Director in the Department of Agriculture, Melvin James, said that to date, 68 out of the 273.5 acres of land reserved for farmers under the Ministry of Agriculture’s stimulus package of $10 million have been cultivated.

“We contacted our private tractors and there are 11 of them on the island and we engaged them all to be involved in land preparation. Over the last two to three weeks we have set them on course and to date, they have already cultivated some 68 acres in and around the island,” said Mr. James. “We have done about eight acres at CARDI in Mansion, 25 acres for the Mansion farmers, nine acres for four farmers in the Saddlers area and 10 acres for six farmers in Sandy Point.”

Director James noted that the machine in Cayon malfunctioned and as such the area has seen the least lands being cultivated thus far.

At the May 16 edition of the National Emergency Operations Center (NEOC) COVID-19 Daily Briefing, he noted that farmers have already started to utilize the lands.

“We have already planted sweet potato and yams in many of these areas because they can stand the heat more than anything else. But the other crops, we have sown some sweet pepper seedlings but we await the rain. We await the rain to plant these vegetables but we have gone ahead with the hardier things,” said the director. “And so, at this point, having cultivated some 60 add acres we have distributed seed and seedlings to some private nurseries for sowing and we ourselves at the department are also sowing some but we have to be hopeful, we have to be prayerful that we get the precipitation necessary for the rainfall.”

The director of agriculture gave a breakdown of the cost incurred to date and noted that although the programme continues to be free to the farmers, the inputs must be purchased.

“The seeds that we gave out at the farmers meeting in March that cover 40 acres actually cost the department some $22, 238 and the land preparation so far is anticipated to cost us $9,000. In fact, as we do our calculations looking at the 70 add acres that we intend to cultivate in this first phase it shows us that it will cost some $997, 883.75,” he said. “Not to mention livestock for example where we are selling at half price so we are receiving only half of the $135,000 involved in the purchase of this commodity. Bayticol, we have spent some $60,000 so far and, of course, you would recall that is being given away free.”

He also touched on the grant of $450,000 for the farmers whose animals are suffering from dermatophilosis – a skin disease caused by a bacterium called Dermatophilus congolensis (derm-ah-TOFill-us con-go-LEN-sis). The disease can affect many species of domestic and wild animals and occasionally humans.