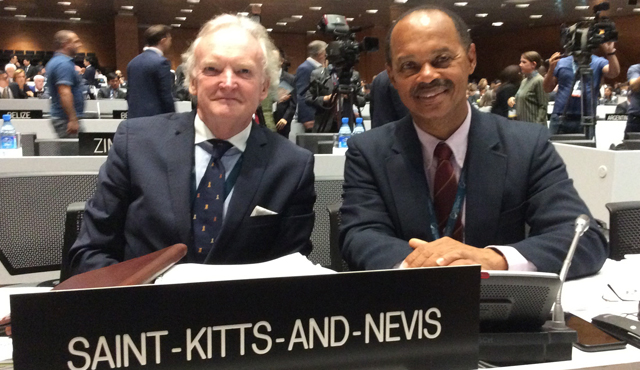 SKN argues for attention for SIDS at the World Heritage Committee

As a relatively new member to the World Heritage Committee, St. Kitts and Nevis started its participation at the 43rd session of this Committee in Baku, Azerbaijan, by urging for more attention and resources to be deployed to boost the institutional capacity of small island developing states (SIDS) in identifying and preparing heritage sites for ultimate inscription on the UNESCO World Heritage List.

Accompanied by Mr. Percival Hanley, General Manger of the Brimstone Hill Fortress National Park and official representative of the Federation to the
Committee, Dr. David Doyle, Ambassador of St. Kitts and Nevis to UNESCO, made this intervention on the first day at the general debate on the World Heritage Centre activities and implementation of its worldwide programme. Noting that the list of both natural and historic sites on the World Heritage List had now reached 1,092 sites, Ambassador Doyle stated that “a remarkably small percentage of these sites are located in SIDS, covering jurisdictions in the Caribbean, Indian and Pacific regions”. “Slightly over 2% of all heritage sites on the list relate to small islands, which speaks volumes about the need to assign a higher priority to theses countries in terms of capacity-building assistance”.

Before an audience comprising some 193 State Parties to the World Heritage Convention, and the 21 state members of the world heritage Committee – which now includes St. Kitts and Nevis since 2018 – Ambassador Doyle urged that “recognition be made of the inherently limited nature of institutional capacity in SIDS, which acts as an impediment in identifying, inventorying and proposing potential heritage sites of historical and cultural interest to the UNESCO world heritage list”.
He concluded by underlining the need for SIDS to be raised up the resource allocation agenda, both at UNESCO headquarters in Paris and within the world heritage committee.

Mr. Hanley, interviewed on the fringes of the opening debates at the Committee in Baku by the Azerbaijan state TV network, noted that “this world heritage committee session, expertly hosted by Azerbaijan, is a pivotal opportunity for St.Kitts and Nevis to secure insights into best practice and leverage the Federation’s presence here to negotiate technical assistance from more experienced and well-endowed State Parties of the Convention”.
Under the auspices of the Hon. minister Shawn Richards, responsible for UNESCO affairs, the representatives from St. Kitts and Nevis both acknowledged the need to position the country over the next three years of its world heritage committee mandate, to promulgate the SIDS cultural heritage agenda.

Visibly, no time was lost in making this point in the first day of the Committee proceedings and some wording is being proposed by our representatives to be incorporated into the Baku Declaration on the protection of cultural and natural
heritage. SKN was elected to the World Heritage Committee in November 2017 for a period of four years and will be the only small island developing state on the Committee when Cuba stands down after the Baku session.