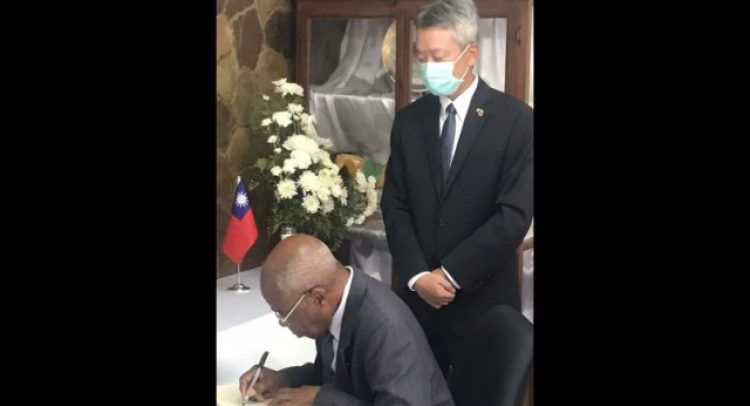 Basseterre, Monday, 10th August, 2020, (MyVue News.com)- The achievements of the late president of Taiwan, Teng-hui Lee, were celebrated today, by the former Prime Minister of St. Kitts & Nevis, Dr. Sir Kennedy Simmonds, who took the bold decision in 1983, to establish diplomatic ties with Taiwan, despite the strong protestations of various foreign governments, including Great Britain.

The strong diplomatic and friendly ties that exist today between Taiwan and St. Kitts and Nevis were established in 1983, but were strengthened by the Simmonds Administration and the Lee government.

When former Prime Minister Simmonds made his first official visit to Taiwan in 1998, it was at the invitation of the late President Lee.

The visit was used, among other things, to develop progressive ties in agriculture, the fruits of which are still being delivered today, along with other tangible products of technical and financial assistance.

Just before signing a book of condolence at the Basseterre based Taiwanese embassy today, (Monday, 10th August, 2020), Simmonds credited Teng-hui Lee for ushering Taiwan, into what has become a prosperous era of democracy.

Lee, in 1996, became Taiwan’s first democratically elected president, after a period of rule by the Communist Party.

Simmonds said that Taiwan’s eventual development, came as a result of the “Sweeping” changes made by the late president.

Simmonds, who is now a National Hero of his country, and the man who led St. Kitts & Nevis into political independence, said, “Taiwan was one of our first friends in the international community.”

He said that he is very happy that “I was in fact the person who established diplomatic relations with the Republic of China, (Taiwan), at a time when it was not such a universally popular thing to do.”

But despite the early diplomatic pressure placed on Simmonds and his young administration at the time, the former Prime Minister said, “We have never regretted it.”

“Small states everywhere, have been inspired by the miracle of Taiwan…by the outstanding development…the economic development and human resource development which Taiwan has enjoyed. But not only enjoyed for her own people, but … Taiwan has assisted people all over the world…particularly small states, to emulate and to endure.”

He told resident Taiwanese ambassador Tom Lee, “I have come today to extend deepest condolences, to you, as their local representative, your president and the people of the Republic of China, (Taiwan), and to pray and hope that this outstanding relationship that we have enjoyed all these years, will continue and become even stronger in the future.”