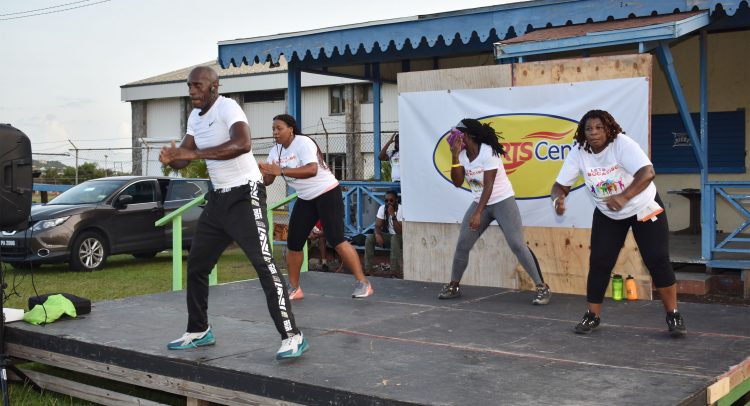 The highly successful SKN Moves-executed Caribbean Wellness Week activities came to an end on Friday September 18 with a Let’s Socacise event held under the sub-theme ‘Stronger Together’ at the Flow grounds along Wellington Road in Needsmust Estate, Basseterre.

“Let’s Socacise is one of the events that have been held for Caribbean Wellness Week from the 12th to the 18th September,” said Dr Delores Stapleton-Harris, Permanent Secretary in the Ministry of Health, who was among the nearly 70 participants.

There were three main activities observed during the week, the Caribbean Wellness Walk held on Saturday September 12, National Fruits Day held on Tuesday September 15, and on Friday September 18 were Sneaker Day with the collaborative Let’s Socacise events.

According to the Permanent Secretary, the whole intention of the events was basically to get people to move, to change their behaviour, to modify their lifestyle, to increase physical exercises, increase consumption of fruits and vegetables, and to have regular health checks, in the Ministry’s efforts to reduce chronic diseases in St. Kitts and Nevis.

“There is a high percentage of morbidity and mortality in St. Kitts and Nevis related to non-communicable diseases, such as diabetes, cancer, hypertension, kidney diseases and so on, and so we – the Ministry of Health – are on the quest to the reduce the burden of this scourge and so here we are engaging in this exercise in an effort to reduce such diseases,” said Dr Stapleton-Harris.

She added: “As well I should say this movement is part of the SKN Moves promoting the same three behaviours, healthy lifestyles with an increased physical activity, regular health checks, and of course intake of vegetables and fruits.”

Let’s Socacise, which was sponsored by the Sports Center Group of Companies Limited, was coordinated by fitness guru Mr Elston Nisbett who was ably assisted in terms of music coordination by ‘Hype-Man’ Mr Jason ‘Pinocchio’ Mitchum. Of the nearly 70 participants, only about five were male who included veteran Medical Practitioner Dr Leroy Richardson.

“The call was made for everyone – all genders…”, commented Dr Keisha Liddie, Director, Community Health Services, who was also a participant, when asked why very few men took part. “Most men would say that they can’t exercise on the spot – they want to move, they want to run, and they want to be in a gym and lift weights. So we do not expect to see a high number of men participating in Socacise, but we do know as we continue each year, we hope to see more men participating in this particular exercise.”

“The Caribbean Wellness week this year has shown some improvement – I think more and more persons are participating in our events,” observed Dr Keisha Liddie. “They are recognising that we are going forward with this momentum and they have joined in. I am also happy to see the Prime Minister shows his support and attends all these walks and events and participates in full, so he does the entire walk. He did so on Saturday September 12 and we are happy to see that we have that support from the top showing example.”

In the meantime, Mr Gopal Ashvani, General Manager, Sports Center Group of Companies Limited, sponsors of the event, said it was their first time experience which he described as being very successful and thanked coordinators Mr Elston Nisbett and Mr Jason ‘Pinocchio’ Mitchum “who did a very good job, and I say thank you to the Ministry of Health for their support. It is encouraging me to do this again whenever we get a chance.”

Three lucky participants, whose names were randomly picked out of a large transparent container, received prizes. First prize of EC$500 went to Ms Jeune Guishard-Pine, second prize of EC$300 went to Ms Keriise Manchester, and the third prize, a fruit basket, was won by a lady who only provided her first name, Shirley.