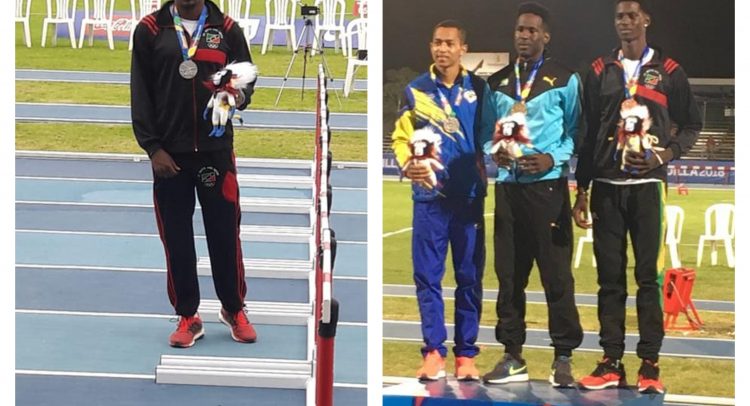 Over the last several days, track and field athletes from St. Kitts and Nevis delivered some remarkable performances at the 2018 Central American and Caribbean (CAC) Games in Barranquilla, Columbia—with two of those athletes earning medals in the process.

The track and field contingent comprised Jason Rogers, Shenel Crooke, Warren Hazel, Jermaine Francis, Kizan David, Kristal Liburd and Kieshonna Brooks and coach, Mr. Shirmon Caines. While all the athletes registered commendable performances, it was Jason Rogers with the silver medal in the men’s 100m finals and Jermaine Francis who claimed bronze in the men’s high jump that stole the show for St. Kitts and Nevis.

Rogers, the 2018 National Champion, copped the silver medal in the 100m final on Monday night with a time of 10.15 seconds just behind eventual winner Nester Carter of Jamaica. He was also able to record his season’s best time of 10.05 seconds in the semi-finals at the same meet.

Meanwhile, Francis cleared a height of 2.28m in the high jump to earn the bronze medal in that event. In doing so, Francis also shattered the National Record, and his height of 2.28m now ranks him at fiftieth in the world.

President of the St. Kitts and Nevis Amateur Athletic Association (SKNAAA), Mr. Val Henry extended congratulations to all the athletes who participated in the CAC Games, noting, “They have all done their nation proud. I however have to recognize the outstanding performances of both Jermaine Francis in the high jump and Jason Rogers in the 100m.”

Mr. Henry added, “In saluting Jason for his Silver medal and Jermaine his Bronze, I do so recognizing that their achievements have come from the strong commitment and dedication that they have to Track and Field. I am hopeful that their medal count at the CAC Games will inspire other athletes to strive for excellence and help to trigger more exceptional performances across the discipline of track and field.”

The SKNAAA President further stated that this recent success, especially when added to the four medals attained at the CARIFTA Games, serves as a wakeup call to all stakeholders in track and field to begin urgently to create a much needed development plan that could help our athletes advance in their chosen sport.

“For me, the focus of our efforts must be on the athletes. We all have to understand that the interest of our athletes must come first and I as president intend to work harder to deliver the programmes and funding that would help our athletes in their pursuits in track and field because when our athletes succeed, so does our nation. And that is why we all, including the business sector, must become part of the solution to the many challenges we face in our efforts to do what is needed on behalf of our athletes,” President Henry stated.

The seven track and field stars were part of larger St. Kitts and Nevis delegation that competed at the 23rd edition of the CAC Games which runs from July 19 – August 3, 2018.