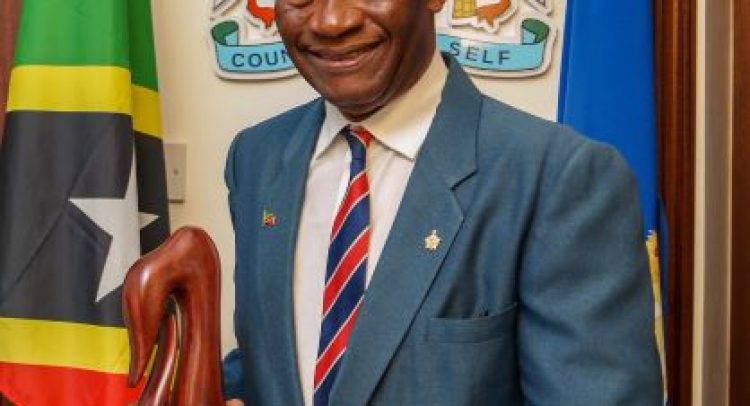 In a ceremony held under the patronage of His Excellency, the Governor General Sir Tapley Seaton at Government House on 30th August 2022, the St. Kitts and Nevis Chapter of the University of the West Indies Alumni Association (SKNUWIAA) conferred the 2022 UWI Pelican Award on renown scientist, Dr. Samuel Rawlins.

The Pelican Award is the highest honour that the Association can bestow upon an alumnus. The recipient must be a graduate of The University of the West Indies who has excelled in his/her chosen field and has had major positive national, regional, or international impact. Nominations were invited from UWI alumni.

Dr Samuel Clive Rawlins was born in Newtown, Basseterre, where he lived with his parents Mr. James Rawlins and Mrs. Agatha Rawlins and his siblings: Hulda, Lily, Grace, Jim and Glen. Upon completion of Secondary education at the Convent school, he headed off to the United Kingdom, to work and to study.

In the UK, Dr. Rawlins gained the Bachelor of Sciences degree at London University, and the Master of Science degree from the London School of Hygiene and Tropical Medicine. He worked for a year in the UK after graduating from the London School, but felt that, with his new set of qualifications and training, what he was employed to do, was not moving him forward in the direction in which he was trained, and the direction in which he was anxious to go”. He was convinced that the opportunities, which he desired existed elsewhere abroad; maybe in the Caribbean”.

Dr. Rawlins applied and found employment, in Guyana, and moved there with his wife Joan. After three (3) very rewarding years of employment in Guyana, Dr. Rawlins decided that it was time to upgrade his qualification. He reasoned that the best way, to do this in the Caribbean, would be to move to Jamaica and find employment with the University of the West Indies, (UWI), Mona while pursuing his doctorate. He applied and found employment, teaching in the Department of Zoology, while working on his doctorate at UWI, which he successfully completed in 1978.

Having completed his doctorate, Dr. Rawlins was immediately offered a post- doctorate Fellowship, in Texas. So, in 1978, he moved with his wife and two young children to Texas where Sam had an attachment with the International Atomic Energy Agency (IAEA) and Texas A&M University.

After three (3) very interesting years in Texas, he was offered employment, as a Senior lecturer In the Faculty of Medical Sciences, Mona, Jamaica, in the Pathology and Microbiology Department. So, the family happily returned to the UWI, Mona.

After eight (8) very productive years in teaching and research at The Medical School (UWI, Mona), Dr. Rawlins was offered what he would later describe as his “dream job” with Pan American Health Organization (PAHO). The job was located at the Caribbean Epidemiology Centre CAREC, Trinidad. He and his family said ‘fare well’ to the UWI, Mona, Jamaica and moved to Trinidad.

Dr. Rawlins had an amazing career there, as the job required that he served 21 countries of the Caribbean and Latin America, using all the skills and experience he had acquired over the years. His contribution to research is embedded in the literature of pests, parasite and mosquitoes in the region. His work during that time is legendary. He stayed with the PAHO, until his retirement, and enjoyed every moment of his time with them.

Most notably, in 2007, Dr. Rawlins was a member of a team of scientists, with US President Al Gore, that won the Nobel Peace Prize for their exceptional work on climate change. St. Kitts and Nevis and the Caribbean were brought further forward, in that moment.

Dr. Rawlins can be described as a real Caribbean man, who has worked in practically every one of the 21 Caribbean countries. This was made possible through his work with the University of the West Indies and the Pan American Health Organization (PAHO/WHO), in the Caribbean. He has traveled all over the world, presenting academic papers at international conferences, and advising governments and public health personnel on matters which had serious implications for the improvement of the health of their populations.

Dr. Sam Rawlins is a man of faith and a man of service. He currently serves as the President of the Gideon Camp Ministry in the Federation and was active in Service-Clubs such as the KIWANIS Club and in the Rotary Club of St. Kitts.

Dr. Rawlins is husband to Dr. Joan Rawlins for 52 years, father to three children and grandfather to six.