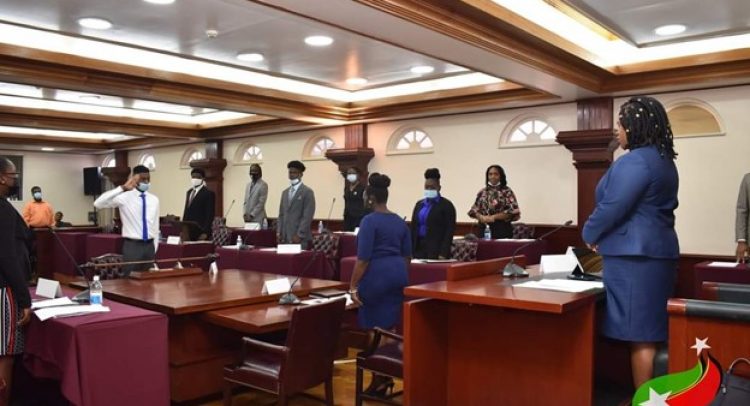 Basseterre, St. Kitts ( Nov. 30,2020) — The “Sexual Harassment Bill 2020” and “Adoption of a National Cultural Policy” were debated by members of the St. Kitts National Youth Parliament Association (SKNYPA) at a Mock Parliament Sitting on Wednesday, November 25, 2020, at the National Assembly Chambers, Government Headquarters.

SKNYPA debated the Sexual Harassment Bill in commemoration of “16 Days of Activism Against Gender Based Violence”. Likewise, the association debated the Resolution calling for the adoption of a national cultural policy and as the nation celebrates National Carnival amidst the COVID-19 pandemic.

The Hon. Jonel Powell, Minister of Education, Youth, Sports and Culture and honorary youth parliamentarian, addressed the attendees at the start of the sitting and used the opportunity to commend SKNYPA for facilitating the Mock Parliament Sitting. While speaking, Minister Powell commented on the Sexual Harassment Bill which he described as an area that is controversial and he believes that there should be more discussions on the topic. Minister Powell who is charged with the responsibility of Culture spoke about the shaping of a Federal Cultural Policy which the Ministry of Culture is currently working on.

The Mock Parliament Sitting was presided over by Ms. Patrice Harris, president of SKNYPA and saw in attendance Deputy Prime Minister of St. Kitts and Nevis, the Hon. Shawn Richards, and other senior government officials, as well as parents, teachers and students.

The government side was headed by Mr. Malakhi Ferguson, acting as Prime Minister and Minister of Finance, National Security, Sustainable Development, Constituency Empowerment, Information and Human Resource Management where he moved the “Sexual Harassment Bill 2020” describing the Bill as one that is of significant urgency and seriousness while making his presentation.

The Honourable Deputy Prime Minister and Minister of Entertainment, Entrepreneurship, Talent Development and Culture, Mr. Jalen Monzac, led the discussion on the “Adoption of a National Cultural Policy.” Mr. Monzac said the Policy will aid St. Kitts and Nevis in its pursuance to economic diversification and improving our export competitiveness. One of the main ideas of the Policy is to further strengthen the present cultural administration and bring about positive cultural identity among citizens.