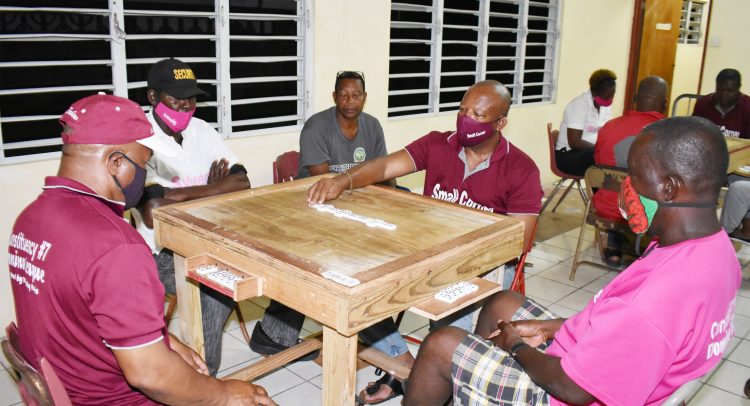 The well-tempered game at the Lodge Community Centre in Lodge Project started on a high note with Sylvers’ Captain Octavia ‘Tackie’ Huggins and player Valencia Alexander playing from table two grabbing the first two games with ease, 116-14 and 109-7, and from table one Robert Charles and Paul ‘Punch’ Bridgewater winning the third game 114-81 for Sylvers to take an early 3-0 lead.

Rattled by the aggressiveness of their opponents, Small Corner Bar changed gears and from table one Austin Williams and David Huggins amassed 109 points against 40 points by Sylvers to win their first game. They however went back to their old form and allowed Sylvers to score another three straight games for a commanding 6-1 lead.

Sensing trouble, Small Corner Bar’s Captain Norris ‘Chuck’ Sharry who was watching from behind the divider railings rested player David Huggins and joined veteran player Austin Williams, a former Commissioner of Police, on table one. This action brought sudden changes as Small Corner won the next eight games, one of them through a bonus after they earned 104 points before Sylvers could get single point from table one.

After Small Corner won their second game on table one, Sylvers substituted their players and brought in Ameer Ali and Audebert St. Ville, but after Small Corner took the bonus game on the same table, the two Sylvers players were replaced by the earlier pair of Robert Charles and Paul ‘Punch’ Bridgewater.

Sylvers’ Captain asked for a break when they were trailing 6-9 but on resumption Small Corner Bar’s pair of Norris ‘Chuck’ Sharry and Austin Williams on table one raced to 116 points with Sylvers having nothing to show, which widened Small Corner Bar’s lead to 11-6, but immediately after that game, and on the same table, Sylvers took the next game at 136-57.

Small Corner Bar players Winston Morris and Robert Tyson on table two after having suffered the two opening games losses were determined to spoil the party for Sylvers and they did so by winning their team’s twelfth game at 111-89 but before they could seal it off, from table one Sylvers earned their eighth game. Not wanting to allow Sylvers take another game, Winston Morris and Robert Tyson on table two brought home the deciding game by amassing 111 points at 10:45 pm against Sylvers’ 86 points to clinch the overall win by 13-8 games.

The two teams will meet on Monday October 19 at the same venue for the second encounter in their final clash, and should Small Corer Bar win they will be crowned Constituency Number Seven Domino League’s Best of the Rest 2020 champions. However should Sylvers win, it will trigger a tie-breaker ‘Super 100’ game to be played immediately.

Domino action continues tonight Thursday October 15 at the Lodge Community Centre in Lodge Project with the first of a best of three games encounter for supremacy in the 25th edition of the 25th edition of Constituency Number Seven Dr the Hon Timothy Harris Domino League which will see former champions Unity Domino Club come up against Tabernacle Domino Club starting at 7:00 pm.