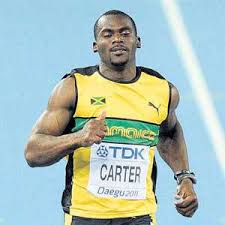 Carter has his eyes set on adding to a bronze medal he won at the IAAF World Championships in Moscow, Russia in 2013 in next year’s edition in Doha, Qatar, while Smith has ambitions of being on the medal podium at the NACAC Championships in Canada later this month.

A number of firsts were set when Carter ran a season best 10.07 seconds (1.7m/s) and Smith ran a wind-aided 11.04 seconds (2.3m/s), both winning their first ever individual gold medal at the senior level in national colours.

According to the IAAF, Carter’s win was the first-ever by a Jamaican man in the 94-year history of the competition, while Smith was only the third Jamaican woman and first in 68 years to win a gold medal in the 100m.

Carter’s wind-aided 9.92 seconds (2.1m/s) in the semi-finals on Sunday night was “the fastest 100m ever recorded under any conditions on Colombian soil, much like Smith’s wind-assisted 11.04 seconds from the women’s final,” the IAAF report also said.

Jamaica won just a bronze medal in track and field when the competition was held in Mexico four years ago and up to Monday night had won three gold, a silver and a bronze.

The 32-year-old Carter is nearer to the end of his career, while Smith, 10 years his junior, is in her first season as a senior. Carter used all of his considerable experience in the final on Monday night as the race was held up for 15 minutes after a false start by Barbados’s Steve Ellis.

Carter noticeably pulled up from about 20 metres, while others including Cuba’s Reynier Mena ran the entire race, seemingly unaware of the recall gun.

Later Carter, who just recently ended a long-running battle with the International Olympic Committee and the World Anti-Doping Agency over a tainted sample he gave at the 2008 Olympic Games that cost Jamaica’s men’s 4x100m relay gold medal, said he was pleased with his performance despite less than ideal conditions in Colombia.

“It is not the best of conditions here in Colombia, but making the best of it,” he said. “Running a season’s best I am very pleased with that,” he said of the 10.07 seconds time, bettering the 10.18 seconds (0.4m/s) he set in the first round on Sunday’s opening day of track and field and the 10.19 seconds (0.0m/s) he set at the JAAA National Senior Championships in Kingston on June 21.

He was asked if he was disappointed not to have gone under the 10-second mark. “It’s track and field and you have no control over the conditions, the (fast) times will come, I just have to get back in the groove I have been out for three years, so I am just trying to take it a race at a time I am very pleased with the time.”

He has bigger targets in his sight. “Next year is World Championships and I want a medal, no matter the colour. Just trying to go there and get a medal, that is my major focus this year, gearing up for next year.”

He is still working out the kinks in the technical aspects of his running, and despite an almost flawless execution in the semi-final, he said: “I figured out a few things in the race, so it is just to go back to the coach and training and work on them.”

Smith was over the moon in her first outing in an individual event on a senior national team after running on the 4x100m relay team at the IAAF World Cup in London last month.

“I feel awesome; I don’t think I could have executed a better race,” she said. “I felt like I stayed patient during the drive phase and when I got out I just really ran as fast as I could.”

Her stamina is a surprise, she admitted. “After a long season, it feels amazing to still be running fast and getting faster; I think the wind kind of assisted as it was very hot before the race.”

While she had set a goal to go under the 11-second barrier this season, she said she was being patient. “One race at a time, that was one of my goals for the season (to go under 11 seconds), but one race at a time. If I don’t get it I just go back to the drawing board and do what needs to be done for next year, but it’s one race at a time and try to stay healthy.”

The former Wolmer’s Girls’ High School and Auburn runner was happy with her execution during the championships, “especially for trials; I was always behind the top names, so to come out here with a strong field and to be able to start well and finish strong, it feels very good”.

Trinidad’s Khalifa St Forte was second in 11.15 seconds, followed by Venezuela’s defending champion Andrea Purica in 11.32 seconds. She just got to the finish line before Dominican Republic’s Marileidy Paulino in 11.33 seconds for the bronze medal.