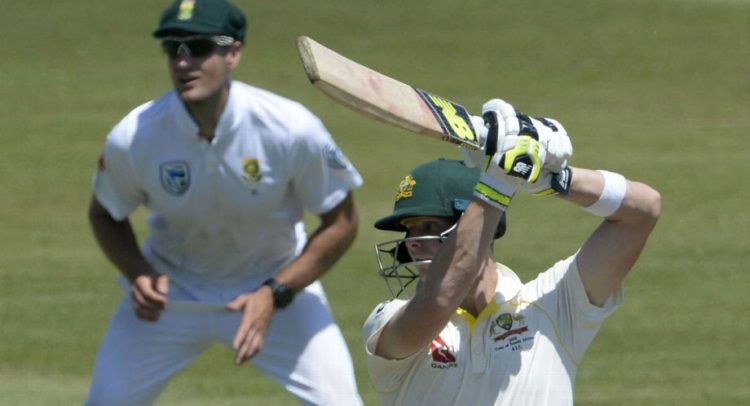 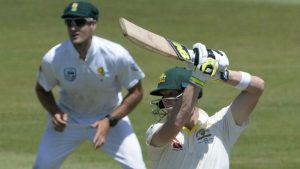 The two giants of Australia’s batting order both reached fifties but South Africa prevented Steven Smith and David Warner from progressing much further on the opening day of the series at Kingsmead. Vernon Philander snared Warner for 51 with the final ball before lunch to leave Australia three-down at the long break, and although just a single wicket fell in the next session it was that of Smith and was therefore worth about three on its own.

At tea, Australia were 170 for 4 with Shaun Marsh on 34 and Mitchell Marsh on 8, the brothers having come together in the half hour before the break after Smith, on 56, edged one off the spin of Keshav Maharaj. At the WACA in 2016, Smith had been the maiden Test wicket claimed by Maharaj and the spinner enjoyed a reprise, gaining a thin edge that bounced off the gloves of wicketkeeper Quinton de Kock and bobbed up to be caught at slip by AB de Villiers.

Smith had raised his fifth score of fifty-plus in consecutive Test innings, and had compiled half-century stands with both Warner and Shaun Marsh. But the loss of Smith, who had earlier won the toss and chosen to bat, opened the door for this to be South Africa’s day, if they could find their way into Australia’s tail – or even better, though it – by the close of play. Their consistent bowling and sharp work in the field had reaped rewards.

Warner had fallen to an excellent catch from de Villiers at second slip off Philander on the stroke of lunch, and it was a particularly important blow for South Africa to strike, given Warner’s powerful record in their country: in his previous six Test innings in South Africa, he had made 12, 115, 70, 66, 135 and 145. He had moved to his half-century from 72 balls, but was destined to go little further.

There was no shortage of action in the opening session of the much-anticipated series, with South Africa out of reviews by the 11th over. They wasted their first on the third ball of the Test, when Morne Morkel’s delivery to Cameron Bancroft was shown to be both high and wide of leg stump, and the second review disappeared when Maharaj’s first ball spun sharply in to Warner – too sharply, for the ball would have missed leg stump.

They were potentially costly errors, for South Africa later could have had Shaun Marsh lbw on 19 had they had a review left in the bank. Kagiso Rabada fired one in from around the wicket and struck Marsh low but was given not out on field; ball-tracking showed the ball cannoning into leg stump.

Still, South Africa would be pleased to have Australia four down at tea. Philander had two of the wickets, having made the first breakthrough when Bancroft strangely walked across his stumps and wafted outside off uncharacteristically to edge behind on 5. Rabada then struck in his first over when he nibbled one way just enough to have Usman Khawaja brilliantly caught by a diving de Kock on 14.

Local political parties gear up for expat vote, but not in Rotterdam