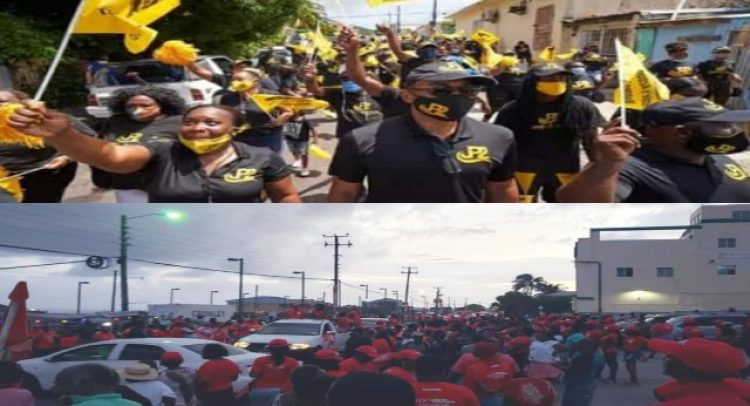 Social distancing ‘out’ as politics take over

Basseterre, Tuesday, 2nd June, 2020, (MyVue News.com) – The current situation of COVID-19 in St. Kitts and Nevis remains hopeful, but the ongoing political campaign for the June 5th General Elections could affect the gains made over the past three months, in practicing social distancing.

As of Monday, 1st June, 2020, there were no results from tests pending, no hospitalization, no deaths, and the 15 persons who were previously tested positive, have all recovered.

In addition no one is quarantined at home, though seven,(7), are quarantined in a designated facility.

And more importantly, it is approaching two months, since the last positive case was reported.

Despite that glowing report for the two islands, health officials and the Head of the COVID-19 Task Force, have been cautioning citizens that irresponsible behaviour, can help to cause another outbreak.

They also warn that a second wave is quite possible.

All that pleading and warning however, have been drowned by the increased volume of political noises overtaking the minds and behaviour of residents, who are now in full campaign mode, as they try to get out the message of their candidates and their political parties.

Put another way, all senses have been suspended, except the ‘sixth’ one, “politics”.

Speaking at a COVID-19 briefing on Monday, 1st June, 2020, Chairman of the National COVID-19 Task Force, Abdias Samuel, issued a call to the politicians and their supporters.

He was adamant in his appeal for the leaders and candidates of PAM, CCM, SKN Labour Party, PLP, NRP, and the independent candidate, though he did not call them by name.

He urged them to “promote safety and security as a priority to all of their followers.”

Since the start of the election campaign, social distancing has been ignored by all sides.

“Social and physical distancing, wearing face masks in public, and thoroughly sanitizing hands are all part of safety protocols established to control any spread of COVID-19 in the community. Not adhering to these guidelines can pose a serious health risk if there is an outbreak of the highly contagious coronavirus,” said a government statement.

The only attempt being witnessed, is that some, a few, in the campaign activities, are wearing masks. But many not sporting them correctly, while others,  carry them in their hands or bags.

The weekend saw motorcades, drive through of party vehicles, relatively large gatherings, and attendance numbers at some virtual rallies, far in excess of what should be accommodated.

But all has not been lost. Many companies, like supermarkets, banks and others, as well as government offices, have maintained standards, with customers following the guidelines for distancing, wearing masks and sanitizing their hands.

However, when the final results of the poll are known on Saturday, 6th June, expect a total collapse of the social distancing protocols. The only hope is that it may only last 48 hours.

“Let us not lose the gains we have made,” appealed the Chairman.

He was referring to the successful containment of the first wave of COVID-19.

A recent government release stated that “Health authorities predict that a second wave will likely come to the country, and note that they are prepared to deal with such.”

But for now, it is like politics gone mad in St. Kitts & Nevis. The excitement is high and the tempers are starting to flare, though no one expects that that would escalate into any serious challenges.

It is simply a part of the political landscape that appears every five years, then die a natural death weeks after the poll, when reality sets in for all groups.

When the polls are held on Friday, 5th June, over 48,000 citizens will be heading to the polling stations in the eleven constituencies.

The outcome of the election is till too close to call, at this time, though all sides are predicting victory.

US cities erupt in more violence amid threats from Trump