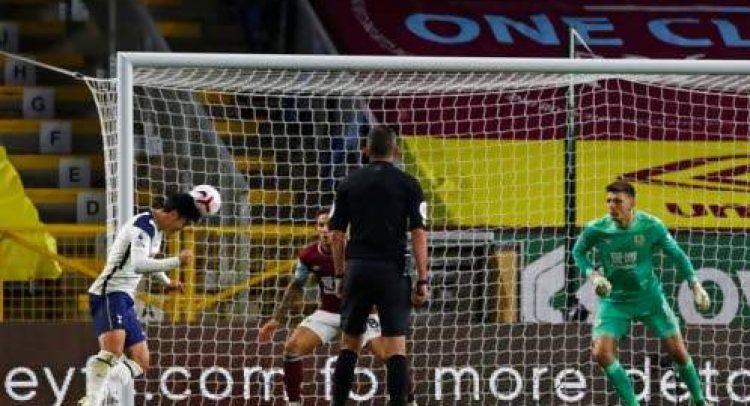 Son and Kane to the rescue for lacklustre Spurs

Son Heung-min pounced to steal a 1-0 win for lacklustre Tottenham yesterday, linking up with Harry Kane yet again as Jose Mourinho’s side climbed to fifth in the Premier League table.

All of the traditional “big six” clubs have dropped unlikely points in the early weeks of the season and Spurs looked set to leave Turf Moor frustrated.

But South Korea forward Son scored his eighth league goal of the season in the 76th minute, heading in from close range after a headed pass from Kane.

Spurs now have 11 points from six games, just two points behind leaders Everton after their third win of the season.

Mourinho hailed his attacking stars, who have now combined for 29 Premier League goals — only Didier Drogba and Frank Lampard have managed more, with 36.

“It is an understanding that comes from Maurcio [Pochettino’s] time,” said Mourinho. “I don’t want all the credit myself, let’s share with Mauricio.

“They play together for a long time, probably a different way, because Harry is not always a nine now.

“What pleases me more about them both is that they are two top players but close friends, no jealousy, they both play for the team.”

The hard-earned three points will be a huge relief to Mourinho, whose side looked like world beaters earlier this month when they hammered Manchester United 6-1 before blowing a 3-0 lead against West Ham.

Tottenham’s attacking momentum vanished at Turf Moor, where they struggled to make an impression against Sean Dyche’s side, who remain in the relegation zone, without a win this season.

Kane was able to get behind Burnley’s defence in the early minutes, following a Toby Alderweireld ball over the top, but the England striker’s first touch took him too wide and his shot sailed harmlessly over.

There was a lengthy stoppage as Alderweireld needed treatment on a bloody right eyebrow after being caught inadvertently by Ashley Barnes’ flailing arm. The Belgian had his head bandaged before play continued.

Slightly against the run of play, Burnley had the ball in the back of the net when Barnes seemingly sprang the offside trap and buried the ball past Spurs goalkeeper Hugo Lloris, but the flag went up.

It was not until the 38th minute that the game had its first shot on target, Ashley Westwood bringing a low save out of Lloris after Josh Brownhill had stolen the ball off Tanguy Ndombele on the edge of the area.

Johann Berg Gudmundsson then cut in from the right and forced Lloris into action once more, as the home side ended the half on top.

Tottenham again struggled to find their rhythm in the early stages of the second half, with Burnley coming close to taking the lead.

The match sparked into life late on, when Kane cleared another header from Tarkowski off the line.

Son failed to take advantage of a clear chance before Kane flicked on a corner to the South Korean, who dived headlong to break the deadlock and seal the win.

Push is on in Wisconsin to return 320K outstanding ballots