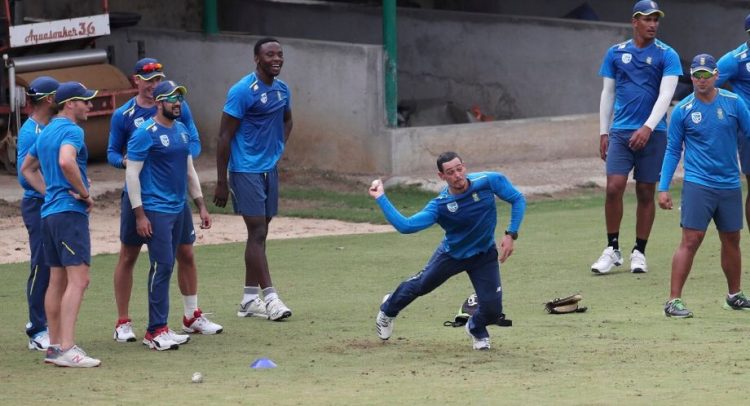 Subject to government approval, South Africa’s national and franchise cricketers could be back in training from next week, and may be involved in an exhibition event at the end of the month. The country moved to Level 3 of the five-stage lockdown today, which allows non-contact professional sports training and matches to take place, after consultation and approval from the sports ministry.

That means national sporting bodies are required to present the ministry with their return-to-train and return-to-play protocols which should include details around social distancing. Cricket South Africa (CSA) hope to submit their plans this week, with a view to resuming training next week.

In its first stage, the return-to-training plan will see franchise cricketers training at their home grounds, in accordance with set guidelines. That includes a prohibition on the use of saliva on the ball as well as regulations around the use of changing rooms – which will not be allowed – and the number of players and support staff who will train at the same time.

At a later stage, CSA will look into whether it is possible to obtain permits to allow for players to travel across provincial borders for camps and eventually matches. Currently, South Africans cannot move between provinces for any reason other than a funeral or the transportation of children between parents or to schools and even those trips require a permit. Inter-provincial travel will be allowed at Level 2 of the lockdown, but there is no indication of when that will be.

However, CSA still hope to be able to put on some live action at the end of June. An insider told ESPNcricinfo that the plan is to put on “something which we have not seen before,” which rules out a T20 festival or any other kind of franchise competition. CSA intend to reveal more in the next few weeks.

South Africa are not in a rush to return to training or playing as they enter the winter period. Their next assignment is a two-Test and five-match T20 series in West Indies in July-August, which is set to be postponed with West Indies due to be in England until the end of July. CSA and Cricket West Indies remain in talks about when to schedule the series and are considering all options, including playing it in South Africa later in the year.

South Africa are also due to host India for three T20s at the end of August and are looking at creating a bio-secure bubble for the series, which will take place behind closed doors. That series is particularly important for CSA finances, as it will help bolster their bank balance, amid forecasted losses of R645 million (approx. US $36.9 million) over the next four years. With South Africa’s Covid-19 cases expected to peak around July, it is possible the India series will have to take place later in the summer but CSA are confident it can happen before the end of the financial year in February 2021.