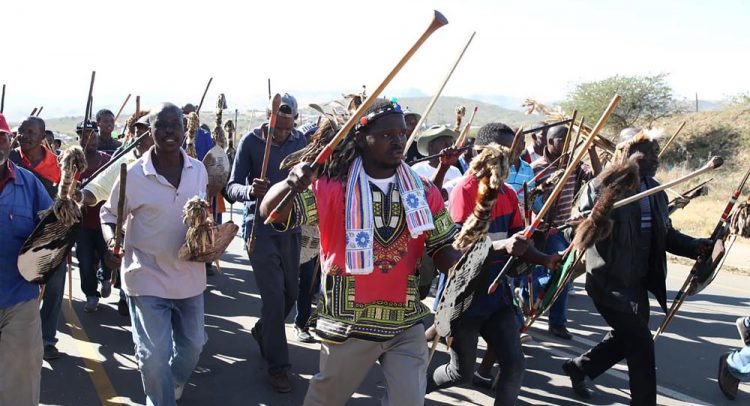 JOHANNESBURG (AP) — Former South African president Jacob Zuma has denounced the 15-month prison sentence he has been given by the country’s highest court and has not said if he will voluntarily comply with the order to turn himself over to the police.

Legal experts and anti-corruption experts have widely welcomed the Constitutional Court’s ruling this week that Zuma should be imprisoned for defying a court order to testify before a judicial inquiry into widespread allegations of corruption during his presidential term from 2009 to 2018.

Zuma criticized the ruling by Justice Sisi Kampempe as “judicially emotional and angry and not consistent with our Constitution,” in a statement issued Thursday by the Jacob Zuma Foundation.

Zuma gave no indication of whether he will hand himself over to South Africa’s police within five days, as the Tuesday ruling ordered, or if he will wait for police to come and get him after that period expires.

About two hundred of Zuma’s supporters, many carrying traditional Zulu shields and sticks, arrived at Nkandla, the former president’s home in rural KwaZulu-Natal, to show their support.

Among those welcoming the sentence for Zuma was Mac Maharaj, a veteran leader of the ruling African National Congress party who had served as Zuma’s presidential spokesman from 2011 until 2015. Maharaj said he resigned because he did not want to be associated with the corruption that he witnessed.

“The evidence is overwhelming that under his administration corruption developed to a point where it became endemic in our system,” Maharaj told the public broadcaster, the South African Broadcasting Corporation.

He hailed the ruling against Zuma as a watershed moment for South Africa.

“History may find that this was the moment that constitutes the turning point in our closing the chapter in the abuse of power and corruption, and entrenching our constitutional democracy,” Maharaj said.

Professor Lesiba Teffo, a political analyst at the University of South Africa, said Zuma had been given more than enough time to comply with the court order.

“As the saying goes, he was given a long rope. And he reached a cul de sac. What has happened is a resounding judgment that I embrace in full,” said Teffo.

The ANC, the party of Nelson Mandela and which Zuma led from 2007 to 2017, said it would discuss the implications of Zuma’s sentence a meeting this weekend of its highest leadership structure, the National Executive Committee.

Zuma is standing trial in a separate matter on charges of corruption related to a 1999 arms deal, where he allegedly received bribes from French arms manufacturer Thales.

Supporters of former president Jacob Zuma descend on his home in Nkandla, KwaZulu Natal Province, South Africa, Thursday, July 1, 2021. Zuma has denounced the 15-month prison sentence he has been given by the country’s highest court and has not said if he will voluntarily comply with the order to turn himself over to the police. (AP Photo)