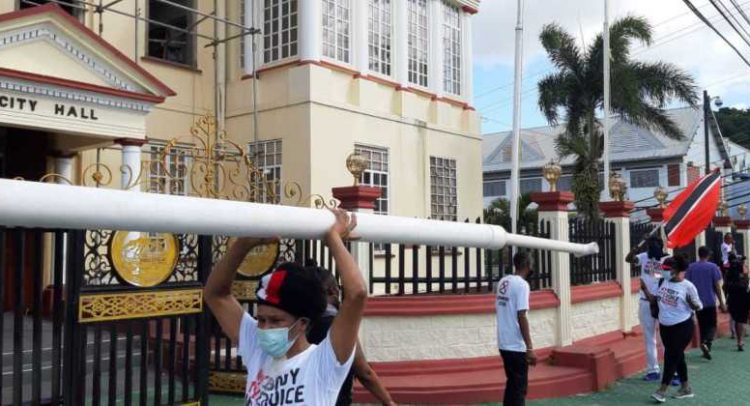 “My body. My choice!” was the chant from a group of citizens, as they walked from Pleasantville to San Fernando this morning, to protest against mandatory vaccination.

Using a long PVC-designed syringe as their prop—and led by entertainer Trisha Hamilton and leader of the Kaisokah Moko Jumbies Junior Bisnath—the group sent a clear message to the Government that they strongly opposed forced vaccination for COVID-19.

“Today’s walk is about my body, my choice. We believe that people shouldn’t be losing their jobs,” explained Tricia Hamilton, who is known as ‘Sexy Trisha’ in the entertainment arena.  “We, as Trinbagonians, we need to be our brother’s keeper.  It is about time we say enough is enough. Too much is too much.  We will not be forced to be vaccinated with something nobody really knows what exactly is going on.”

Hamilton said it would be spitting in the face of the forefathers who fought for freedom and liberation to not fight for their rights.

“Even God give(s) us our own will to choose, so no government, no human being, should take that right from us,” she reminded the churchgoers and leaders.

Noting that safe zones were not preventing the spike in cases, Hamilton said vaccinated people should not scorn those who are unvaccinated. She said today’s walk was for all public servants including police officers and nurses, and every person who is being pressured to take the vaccine.

Junior Bisnath said his wife went to work a week ago and was sent home because she was not vaccinated. He called on people who are against mandatory vaccine to stand up and fight back.

Prime Minister Dr. Keith Rowley has given public servants until the middle of this month to take the jab, or they would not be paid.