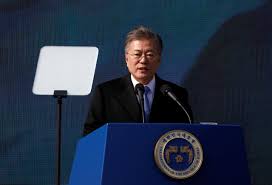 President of South Korea, Moon Jae-in has discussed the potential of a three-way summit between North Korea, South Korea and the United States.

Speaking about a potential meeting, Moon said, “though it is an unexplored path we have never walked, we have clear plans and a clear vision of goals we seek to achieve through an agreement between the leaders of the South, North and the US.”

South Korea is preparing an inter-Korean dialogue with its communist neighbours to the north and, “depending on the outcome, it may lead to a three-way summit of the South, North and US,” said Moon.

The focus of a potential summit would centre on nuclear disarmament, the president said.

“We must completely resolve the issues of denuclearising the Korean Peninsula and establishing peace through these upcoming talks and others that will follow,” he added.

Moon also highlighted the importance of a potential summit in terms of shaping the future for the three nations.

Nuclear disarmament “is not something that can be realised only through an agreement between the South and the North. It requires a US guarantee, and that would require normalisation of the North-US relationship or even economic cooperation between the two,” said Moon.

Moon added that successful dialogue between all three parties could lead to – “a permanent peace regime on the Korean Peninsula and the normalisation of the North-US relationship, development of South-North Korean relations, economic cooperation between the North and the US or the North, US and South Korea,” he said.

An inter-Korean summit, where Moon will meet his North Korean counterpart, Kim Jong-un, will take place at the end of April. “Holding a North Korea-US summit, following a South-North Korea summit, itself is a historical event,” said Moon in advance of the summit.

The meeting between North Korea and South Korea was organised back on March 5-6 when South Korean delegates travelled to North Korea.

US President Donald Trump will meet Kim in late May.

Moon said that any agreement with North Korea would need to be ratified in parliament so that it could not be affected by a future change in the South Korean leadership.

The inter-Korean summit will be the third summit between the countries. The last two summits in 2000 and 2007 lead to a thawing of diplomatic ties with a joint venture in the construction of an industrial complex in Kaesong, North Korea – but it was later closed in 2016 under South Korean President Park Geun-hye.

Historically, relations have been problematic – both Koreas were at war from 1950-1953.

Last month political tensions between both neighbours dissipated during the Winter Olympics held in South Korea.