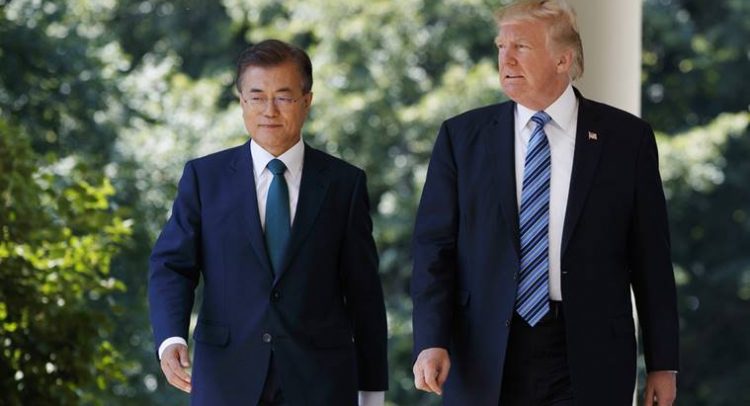 South Korea’s President Moon Jae-in and U.S. President Donald Trump plan to discuss North Korea during the U.N. General Assembly in New York this month, Moon’s office and the White House said on Tuesday, amid lackluster progress on the North’s nuclear issues. Moon and Trump spoke for 50 minutes by telephone on Tuesday, a day before Moon’s special envoys were due to visit Pyongyang to discuss a third summit to be held this month between the liberal South Korean leader and his North Korean counterpart.

The planned inter-Korean summit follows Trump’s cancellation of a visit to Pyongyang by U.S. Secretary of State Mike Pompeo last month after Pompeo received a belligerent letter from a senior North Korean official.

Moon and Trump agreed in their call “to explore the idea of meeting in person on the margins of the U.N. General Assembly and having in-depth consultations on strategies and how to cooperate on the peninsula issues,” Moon’s office said in a statement.

In Washington, White House spokeswoman Sarah Sanders said in a statement that Moon briefed Trump on his plan to send a special envoy to Pyongyang on Wednesday to meet Kim.

“They agreed to meet later this month on the sidelines of the U.N. General Assembly in New York,” she said.

Kim vowed during his unprecedented summit with Trump in June in Singapore to work toward complete denuclearization of the Korean Peninsula, but the two sides have made little headway toward that goal.

Earlier on Tuesday, Chung Eui-yong, chief of the national security office at Seoul’s presidential Blue House, said he would deliver a letter from Moon to Kim when he visits the North, without elaborating on its contents.

Chung said he wanted to discuss with Pyongyang officials ways to achieve the complete denuclearization of the Korean Peninsula.

Seoul will continue to push for a joint declaration of an end to the 1950-53 Korean War this year with the United States, Chung told reporters.