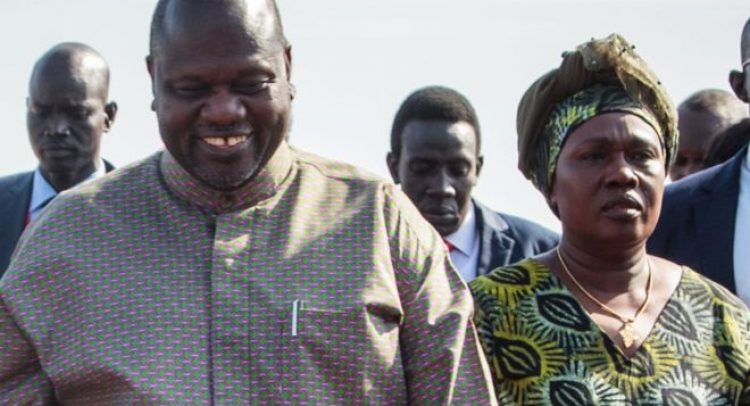 The Vice-President of South Sudan, Riek Machar, who was part of a task force to fight coronavirus, is in self-isolation after testing positive for Covid-19.

Mr Machar said as several other members of the task force were infected a new team was taking over their work.

His wife, who is Defence Minister Angelina Teny, some bodyguards and other staff also have the virus.

Experts worry that decades of conflict has left South Sudan incapable of dealing with a surge in new infections.

So far South Sudan has recorded 236 cases of Covid-19 and four deaths.

Last week, the authorities announced the virus had reached a UN refugee camp in the capital, Juba, where some 30,000 people have sought seeking shelter and protection.

A case has also been confirmed in a similar camp in northern Bentiu, home to almost 120,000 people, the AFP news agency reports.

As that person had been “mixing” with the rest of the team, he decided that everyone on the task force be tested.

“Many of our colleagues who have been found positive are in good health… from now onwards we shall be quarantining ourselves in the house,” Mr Machar said.

Mr Machar formed a joint government with his political rival President Salva Kiir in February after years of conflict which has resulted in hundreds being killed and thousands being displaced.

As part of the power-sharing deal, Mr Machar, is ranked first among four vice-presidents serving as deputy leaders to Mr Kiir.

Apart from dealing with the Covid-19 pandemic, South Sudan has also been named among countries most at risk of what the UN World Food Programme (WFP) calls a “hunger pandemic”.

The WFP says that hunger and malnutrition in the country are at the most extreme levels since 2011, with almost 60% of the population struggling to find food every day.

Making the situation worse, swarms of locusts which had destroyed crops across East Africa arrived in South Sudan earlier this year.

US Open no longer ‘open,’ eliminates qualifying for major