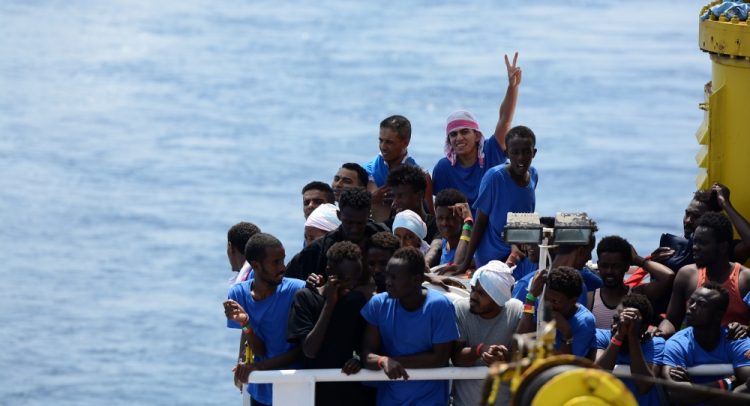 Spain and Portugal have offered to take in most of the 141 refugees and migrants on board the Aquarius, resolving a new standoff over the rescue ship.

On Tuesday, Madrid said it would accept 60 people, while Portugal offered to welcome 30, with the remainder distributed between France, Germany and Luxembourg, government sources in Malta and Spain said.

The boat was initially refused entry by Italy and Malta after it had rescued the refugees and migrants in two separate missions off the Libyan coast on Friday.There are 67 unaccompanied minors, two children under the age of five and two pregnant women on board, its crew reported.

The Aquarius, which hit the headlines in June after being stranded with 630 migrants on board, causing a major diplomatic row, resumed its rescue operations off Libya last week.

Spain’s new socialist government helped resolve the first standoff by allowing the boat to dock in Valencia and was again at the forefront on Tuesday.

“Spain has coordinated a pioneering agreement with six countries to share the hosting of the people on the Aquarius … Spain will take 60 people,” Prime Minister Pedro Sanchez wrote on Twitter.

Malta later said it would allow the ship’s passengers, including unaccompanied children from Somalia and repressive Eritrea, to disembark.

“Malta will be making a concession allowing the vessel to enter its ports, despite having no legal obligation to do so,” said a government statement posted on Twitter.

Malta in a statement called the arrangement a “concrete example of European leadership and solidarity.”

Its government also noted that it had rescued 114 migrants at sea on Monday – 60 of whom will also be distributed among other EU nations.

Though departures from Libya have fallen dramatically this year, people smugglers are still pushing some boats out to sea.

An estimated 720 people died in June and July when charity ships were mainly absent, Amnesty International estimates. The UN International Organisation for Migration (IOM) has documented the deaths of 1,524 people while trying to enter Europe by sea in 2018.

EU border agency Frontex said on Monday it counted 73,500 “irregular border crossings” into the bloc so far this year via the sea and the Western Balkans route, more than 40 percent fewer than in the first seven months of 2017.

Russia backs non-dollar trade with Turkey, no promise of help amid lira crisis

Risk of getting Zika in the Caribbean low at this time: CARPHA