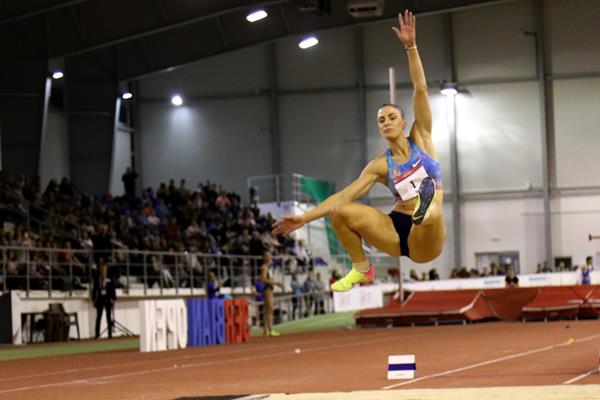 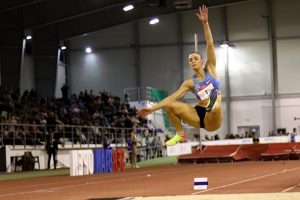 Ivana Spanovic produced a world-leading 6.93m leap in the long jump to highlight the 3rd Serbian Open in Belgrade on Wednesday (21).

Opening with a 6.64m effort, the 2016 world indoor silver medallist improved to 6.85m in round two before extending her lead with a 6.93m jump in round three. She then added leaps of 6.72m and 6.67m before calling it a night.

“I was really satisfied with my jumps tonight,” Spanovic told interviewers for Serbia’s Telegraf.rs. “They’re pretty much in line with how I’ve been jumping at recent meetings. So I think I’m rounding into good form before the World Indoor Championships in Birmingham.”

Spanovic currently has a narrow one-point lead in the IAAF World Indoor Tour standings in her event. Her final pre-Birmingham appearance will come on Sunday in Glasgow, where the Tour winner will be decided.

Elsewhere, Ludovic Payen from France won the men’s 60m hurdles in 7.69 ahead of Italian Paolo Dal Molin who clocked 7.74. Ukraine’s Hanna Plotitsyna won the women’s contest in 8.02 ahead of Croatians Ivana Loncarek and Andrea Ivancevic who clocked 8.16 and 8.17.

In other jumps action, Croatian record holder Ivan Horvat topped 5.62m for the win while Kostadinos Baniotis of Greece took the high jump at 2.26m.

COE IN ATTENDANCE
IAAF President Sebastian Coe was a special guest of the Serbian Athletics Federation at the competition, part of a day in which he spent meeting with national and local officials to discuss recent Serbian initiatives in the sport.

Serbia has invested heavily in athletics in recent years, completing three indoor and eight outdoor facilities in the last three years alone. Another three –one indoor and two outdoor– are scheduled for completion by 2020.

The Serbian government is committed to and will continue investing in the sport, Minister of Sport Vanja Udovicic said.

“We are here as a partner of the IAAF to do whatever is required to develop and promote the sport. We will continue aiming to host the World Indoor Championships,” he added.

Coe expressed thanks to Belgrade Mayor Sinisa Mali and to the Serbian government for their ongoing and increased support for the sport.

“We’re looking forward to the continued growth of athletics, not just running and stadium events, but also road events and other forms that our sport is beginning to take,” he said.

“The European Indoor Championships last year, that I was at, was a fantastic event,” he said. “You’re building the infrastructure and you have some extraordinarily talented athletes that are gaining a big following with young people. So the ingredients are all there. So I hope, and I really want, Serbia to continue to show interest in wanting to stage our major events.”