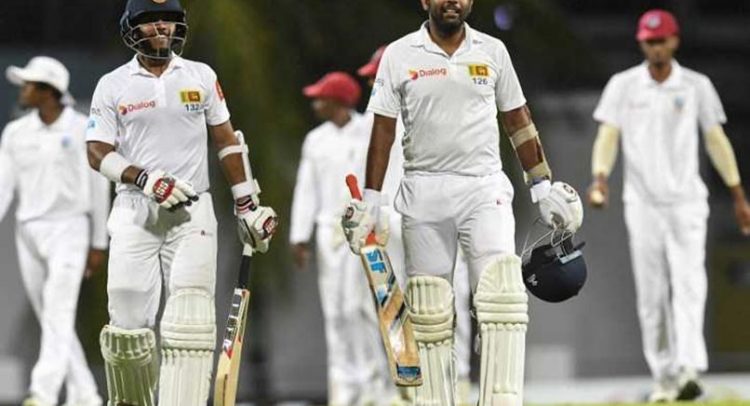 Sri Lanka closing in on victory over Windies Sri Lanka were 63 runs away from a first-ever Test victory over the West Indies at the Kensington Oval yesterday following an action-packed third day of the final Test.

A stunning day’s play, which saw 20 wickets fall in the day/night Test saw Sri Lanka, set a target of 144 to level the series and become the first Asian team ever to win at the venue.

At stumps, however, Sri Lanka’s hopes of victory remained in the balance with the tourists stumbling to 81 for five in their second innings.

Sri Lanka’s hopes of victory were dealt a further blow after an injury to batsman Kusal Perera.

Perera had to be taken from the field in an ambulance after he crashed into an advertising board attempting to take a catch on the long-on boundary which would have ended the West Indies second innings on 82.

As it was, they added just 11 more runs to be dismissed for 93, their lowest-ever total in a Test innings at the ground.

Still, with a lead of 50 runs after the Sri Lankans folded swiftly in the first session to be dismissed for 154 in reply to the hosts’ first innings total of 204, the task was expected to be a challenging one on a pitch that continues to be very helpful to faster bowlers.

So it has proved with Jason Holder leading the way with the ball yet again in what is turning out to be personal tour de force for the West Indies captain on his home ground.

He tops-cored in the West Indies first innings with 74 and polished off the Sri Lankan tail in the first innings to finish with the excellent figures of four for 18.

Sri Lanka will rely on Kusal Mendis (25 not out) to guide the tourists to their target in partnership with off-spinning all-rounder Dilruwan Perera.

In a match where batsmen have struggled throughout, Niroshan Dickwella’s top score of 42 was the only effort of note in Sri Lanka’s first innings as Shannon Gabriel and Kemar Roach combined for five wickets before Holder took over to clean up the tail.

But he had very little time to reflect on his effort as the visitors hit back hard in having the West Indies tottering at nine for three in their second innings just before the day’s first interval. This was the first time in 90 years of Test cricket that the West Indies lost their first three wickets with less than 10 runs on the board in both innings.