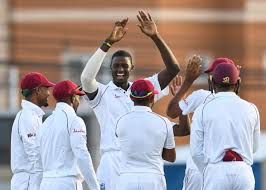 Shane Dowrich’s second Test century put the West Indies in control of the first Test against Sri Lanka as the home side declared their first innings at 414 for eight before a period of hostile fast bowling had the visitors struggling at 31 for three at stumps on day two at the Queen’s Park Oval yesterday.

Captain Dinesh Chandimal and Roshen Silva will carry the fight for the Sri Lankans into the third morning after Kemar Roach, Shannon Gabriel, and West Indies skipper Jason Holder claimed a wicket each to leave the visitors in a desperate situation after just ten overs of their reply.

It was a particularly eventful passage of play for Holder as he first completed a fine catch at third slip to remove opener Kusal Mendis off Gabriel but then promptly dropped a sitter in the same position of the first ball faced by Angelo Mathews.

Sri Lanka’s former captain did not benefit from the reprieve, however, as Holder took the ball himself to deliver what proved to be the final over of an extended final session and with his second delivery had Mathews taken low down by Roston Chase at third slip.

Chase had also shown a safe pair of hands at point to account for the other opener, Kusal Perera, who wafted at the first delivery he faced from Roach in the opening over of the Sri Lankan innings.

Sri Lanka’s shell-shocked demeanour appeared to be the combined result of the West Indies fast bowlers’ assault and the resilience of the hosts’ lower-order batting built around an excellent unbeaten 125 by Dowrich.

Bishoo, who contributed 40 in a seventh-wicket stand of 102 and Roach, whose innings of 39 in an eighth-wicket partnership of 75, appeared to thoroughly deflate the opposition.

In the face of mounting criticism over his continued place in the team, Dowrich responded in the best possible manner with a determined effort.

He reached the century mark off the final ball before tea, turning a delivery from Rangana Herath through square leg and showed greater adventure at the start of the final period of the day.

It was an innings that will nevertheless be remembered more for its doggedness than the extravagance which he curtailed to a considerable degree.

Rain had limited play to just 43 minutes in the morning session during which time Dowrich and Bishoo added 22 runs without ever looking to be in any real discomfort.