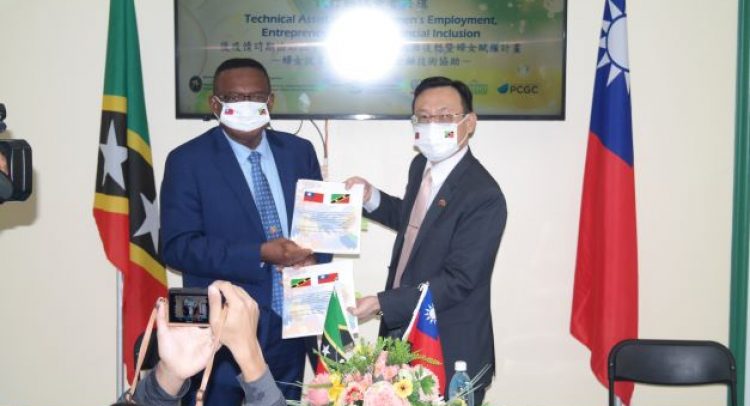 Basseterre, St. Kitts, October 13, 2021 (SKNIS): The Republic of China (Taiwan) is implementing a new programme for diplomatically allied members dubbed “Assisting the Economic Empowerment of Women in Latin America and the Caribbean in the Post-Pandemic of COVID-19” initiative. The programme design is in keeping with the United Nations Sustainable Development Goals, as highlighted by a top diplomat on Tuesday, October 12, 2021.

“The focus of this project on women is corresponding to the objectives and the core values of the United Nations (UN) entity for gender equality and the empowerment of women,” said St. Kitts and Nevis’ Resident Taiwanese Ambassador, His Excellency Michael Chau-Horng Lin.

The statement was made during an implementing arrangement signing ceremony that officially signalled St. Kitts and Nevis’ participation in the initiative. Ambassador Lin said that the initiative would provide technical assistance for women’s employment, entrepreneurship and financial inclusion. The ceremony was held at the Taiwan Technical Mission Office at Needsmust. It was attended by officials from St. Kitts and Nevis including Federal Minister of Social Development, the Honourable Eugene Hamilton as well as representatives from the Taiwanese Embassy. At the end of the course in 2022, qualified individuals will be invited to operate their small businesses with financial support from the programme.

Pursuing the SDGs are extremely important to Taiwan, although it is not a member of the United Nations. Ambassador Lin said that efforts to gain such recognition will continue.

“I would like to emphasize that we are resolute in our drive to join the United Nations as we will continue to work with St. Kitts and Nevis to pursue the goals set by the United Nations,” His Excellency Lin expressed. He specifically highlighted Minister Hamilton’s advocacy in support of Taiwan’s admission to the World Health Organization at international fora.

Honourable Hamilton said that he was proud of the strong bonds of friendship that exist between the two countries dating back to 1981. The relationship was subsequently formalized in 1983 when the twin-island gained Independence.

“I have every reason to declare how enduring, rewarding, and how exhilarating it is for us in St. Kitts and Nevis to have found you as a friend,” Minister Hamilton stated. “You hold the distinction of being our first and oldest ally sharing the democratic values we hold so dear of liberty, freedom, equality and justice.”

The minister noted that this new initiative is most welcomed as it complements the local government’s programming and stimulus relief efforts to empower women, single families and small businesses that have been hard hit by the COVID-19 pandemic.

St. Kitts and Nevis and The Republic of China (Taiwan) collaborate on project to enhance economic and social stability of women