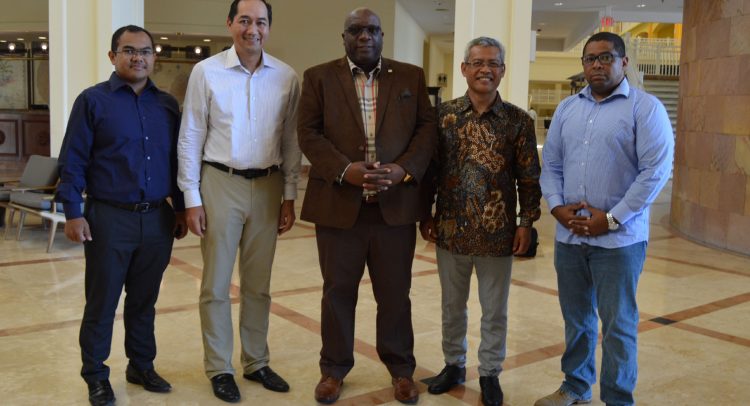 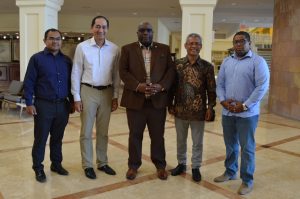 Indonesia’sAmbassador to the Federation of St. Kitts and Nevis, His Excellency Priyo Iswanto, has said that his country considers the Federation an important partner in the Caribbean region, and he is out to strengthen their cooperation, and explore possibilities of his country investing in the Federation.

“We would like to strengthen cooperation not only in government to government but we would like to strengthen also on the presence of private sector,” said the diplomat on Saturday March 3 in Basseterre after a meeting where he had accompanied the Special Envoy of the President of Indonesia for Caribbean and the Pacific, His Excellency Muhammad Lutfi, who held discussions with Prime Minister Dr the Hon Timothy Harris.

According to His Excellency Iswanto, the visit of the Special Envoy had a two-pronged objective, which was first to strengthen government to government cooperation and the second one was to meet with the private sector and in that way develop economic diplomacy between the two countries.

The Special Envoy also met with the Governor General His Excellency Sir Tapley Seaton, GCMG, CVO, QC, JP at Government House, and the Federal Foreign Affairs Minister and Premier of Nevis, the Hon Mark Brantley in Charlestown, Nevis. He also held meetings with the Chamber of Industry and Commerce, and the St. Kitts Investment Promotion Agency (SKIPA).

Prime Minister, Dr the Hon Timothy Harris, who is also the Federal Minister of Finance said that the Federation, as a Small Island Developing State which has a well-trained workforce, is open to do business with all friendly nations and organisations.

“Indonesia has a lot to share with our country, and the recent upgrading of its engagement at the diplomatic level where it has a non-resident ambassador representing its interests in the Federation goes a long way in cementing the good relations between the two countries,” commented the Prime Minister.

“It was my pleasure to meet and hold very productive talks with the Special Envoy of the President of Indonesia for Caribbean and the Pacific, His Excellency Muhammad Lutfi, which will be of benefit to the two countries,”added Dr Harris. “The recent visa waiver agreement signed between the two countries opens doors to Indonesians to do business with the Federation of St. Kitts and Nevis.”

Diplomatic relations between the two countries were established in 2014, but it was not until nine months ago that Ambassador Priyo Iswanto was accredited to St. Kitts and Nevis but with his residence being in Bogota, Colombia.

“During the nine months that I have been accredited to St. Kitts and Nevis, the two countries have been able to strengthen their relations and cooperation,” said His Excellency Iswanto. “First thing we have done is the signing of an agreement on visa waiver. St. Kitts and Nevis citizens could enter Indonesia free without visa, and vice versa, to allow for the free movement of people.”

“We would like to share our experience of batik making with St. Kitts and Nevis,” said His Excellency Iswanto. “Batik making is important for women empowerment because it could create small scale industry and small scale economy, it is very important.”

The Ambassador added that Indonesia will also arrange for a St. Kitts and Nevis delegation, of a participant and an expert in disaster risk management, to train in disaster mitigation. He noted that climate change and the environment are issues that no country can afford to ignore, and promised that the two countries will work together in that regard.

This is the Ambassador’s fourth visit to the Federation in the short space of time has been accredited to St. Kitts and Nevis.