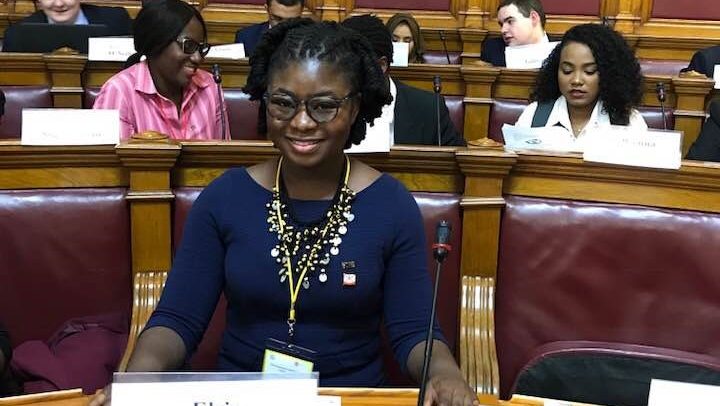 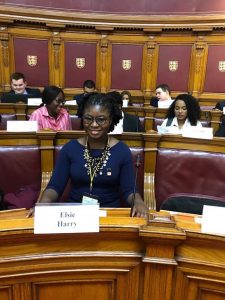 A total of fifteen countries from 35 Commonwealth Parliamentary Association (CPA) Branches across the 8 CPA regions were represented at this event ranging from the largest (India) to the smallest (Niue).

The Commonwealth Youth Parliament, which was held from February 28th –March 1st, afforded some forty-nine young persons from across the Commonwealth, the opportunity to serve as Members of Parliament, representing the Government, the Opposition and Independents of a fictional country known as ‘Commonwealthland’ and to debate current issues such as: Education and Skills; Healthcare; and Planning Policy in the States Assembly of Jersey.

According to Ms. Harry, “It also offered youth parliamentarians the unique opportunity to interact with the laws of Jersey, under the tutelage of learned Jersey parliamentarians and to be mentored by parliamentarians from the Turks and Caicos, Guyana and Kenya, thereby acquiring a greater understanding of general parliamentary practice and procedures.” The young parliamentarians also had the privilege of interacting with the Secretary-General of the Commonwealth Parliamentary Association, Mr. Akbar Khan, who participated in the welcome reception for the delegates.

Ms. Harry, also noted that as a young media professional, she was very happy for the opportunity to participate in a mock press conference with seasoned journalists, which she says “gave youth parliamentarians the opportunity to experience life in the eyes of the press, addressing questions on policy and their respective party values in a very limited time.”

The very vibrant Ms. Harry concludes that the entire experience “was very enlightening” and extends her profound gratitude to her Association, the St. Kitts National Youth Parliament Association for her nomination, the St. Kitts and Nevis Parliamentary Branch for its sponsorship of her participation, and the organizers, the Commonwealth Parliamentary Association, in collaboration with the Jersey States Assembly, for the warm hospitality and their exceptional hosting of this event, which has certainly prepared the future leaders with the fundamentals of the process of Parliament.